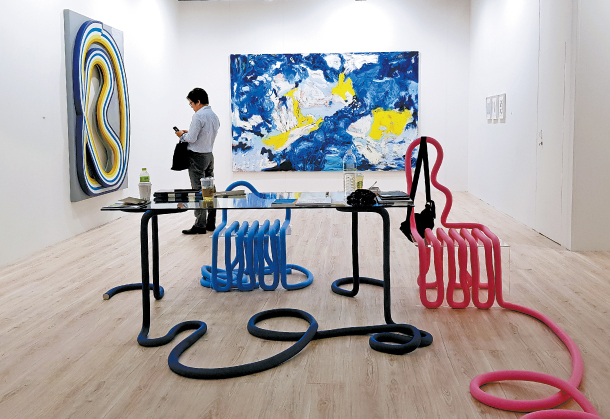 The booth of Berlin-based Peres Projects pairs fine art and design at the 2019 edition of the Art Busan fair, which wrapped up on Sunday after drawing a record number of visitors. [MOON SO-YOUNG]


BUSAN - The three-day fair Art Busan wrapped up on Sunday after attracting more than 63,000 visitors, the most ever, its organizer said on Monday.

The annual art fair based in the southern port city has rapidly expanded in recent years since its launch in 2012, growing to challenge the nation’s top art fair Korea International Art Fair (KIAF), which is based in Seoul. The latest edition of KIAF also attracted around 63,000 visitors in October last year. The 2019 edition of the Busan fair, held at the Bexco Exhibition Center, was joined by 164 galleries from 17 countries, compared to 174 galleries from 14 countries for the KIAF 2018.

“The quality of Art Busan is quickly improving, although it isn’t yet equal to that of KIAF,” Lee Hyun-sook, the founder and head of Kukje Gallery, one of Korea’s most influential galleries, told the Korea JoongAng Daily on Friday, when a VIP preview of the Busan fair was held.

In the Busan fair, Kukje presented paintings by masters of dansaekhwa, or Korean monochrome painting, including Park Seo-bo and Ha Chong-hyun. Separately, Ha started a solo show at the gallery’s Busan branch on Thursday. Kukje also presented at the fair works by star foreign artists such as Ugo Rondinone and Anish Kapoor. The gallery said on Monday it saw good sales of paintings by Park and Ha.

Four new European participants were added to improve the vitality and quality of the 2019 Art Busan, and presented a smart selection of artists and refined installations. They are Peres Projects, Societe and Konig Galerie, all based in Berlin, and Almine Rech, a Paris-based gallery run by Almine Ruiz-Picasso, the granddaughter-in-law of the iconic artist Pablo Picasso.

Peres Projects presented an impressive booth, matching Donna Huanca’s performance-based paintings and Blair Thurman’s works that hover between pop art and minimalism with Korean designer Greem Jeong’s furniture made of tubes. The booth was made in collaboration with Functional Art Gallery, also based in Berlin, which deals with design and art furniture.

“The two galleries do business separately but have been collaborating for art fairs,” said Benoit Wolfrom, who co-founded Functional Art Gallery with Javier Peres, the founder of Peres Projects. “We intend to shape conversation between art and design. And [for practical reasons], at your home, you tend to have both [fine art and design].” 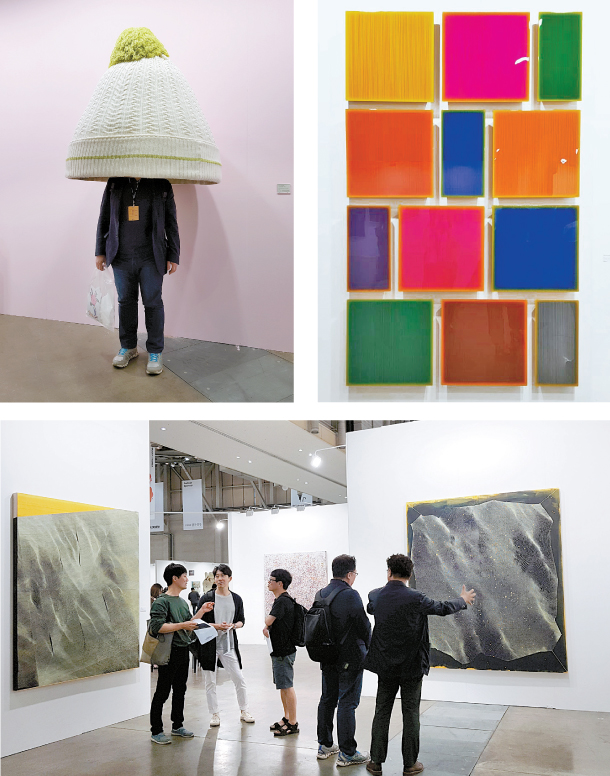 Konig Galerie made its booth a solo show of Austrian artist Erwin Wurm, who is famous for his humorous sculptures, which are “about paradox coming from the coexistence of contradicting things,” according to the artist.

Hakgojae Gallery, one of the major Korean galleries that joined Art Busan for the first time this year, saw its artist Kim Hyun-sik win the 2019 Art Busan Award. The participants also included relatively young and new galleries. Among them, Jason Haam Gallery presented works by Sarah Lucas, who was part of the Young British Artists movement, as well as American artist Linn Meyers and Romanian artist Mircea Suciu.

“I’m happy to have sold [provocative] works by Lucas in the conservative city of Busan,” the gallery founder Jason Haam said. “Art Busan has great potential to develop further with several advantages, including that it is held in a port city, which enables shipping of artwork by sea to collectors. It costs less than shipping by air,” Lee of Kukje said.