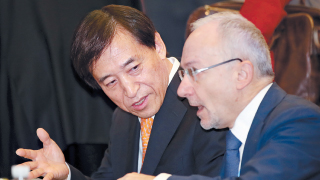 Bank of Korea Governor Lee Ju-yeol, left, with Claudio Borio, head of the monetary and economic department for the Bank for International Settlements (BIS), talk at a Korean central bank conference in Seoul on Monday. [YONHAP]

A private economic research institute trimmed its 2019 forecast for Korea’s gross domestic product growth on Monday, the latest in a series of downward revisions by institutes.

The Korea Economic Research Institute (KERI), a think tank run by the Federation of Korean Industries lobbying group, lowered its projection from 2.4 percent to 2.2 percent.

It was one of the lowest so far.

KERI cited sluggish exports affected by the trade dispute between the United States and China and declining earnings from local chipmakers.

The adjustment came after the central bank kept the benchmark interest rate unchanged on Friday in line with market expectations.

But one board member, Cho Dong-chul, voted to lower the rate, seen by some analysts as a signal of a future rate cut.

The Bank of Korea also said in a statement that uncertainties for the economy have increased, underscoring downside risks.

Friday’s decision led some institutes and brokerages including Hi Investment & Securities to revise their interest rates projection from a freeze throughout the year to a single cut for this year.

A rate trimming has gained traction as a number of research institutions have moved to revise down their forecasts.

Bank of America Merrill Lynch pushed down its outlook for growth this year from 2.4 percent to 2.2 percent, the same as the KERI.

The Korea Development Institute slashed its growth forecast to 2.4 percent from 2.6 percent, matching the OECD’s forecast. The central bank trimmed its outlook from 2.6 percent to 2.5 percent in April.

Meanwhile, Governor Lee called for the swift implementation of corporate restructuring to boost economic growth and trade, which have been weakened due to the latest trade war between the world’s two largest economies.

“With the impact of the trade war, the expansion of global economic linkage has been reduced,” Lee said during the BOK’s annual conference, which had the theme, “Global Economic Linkages: Impacts and Policy Implications.”

“So, we need to enhance resilience against external shocks,” Lee said.