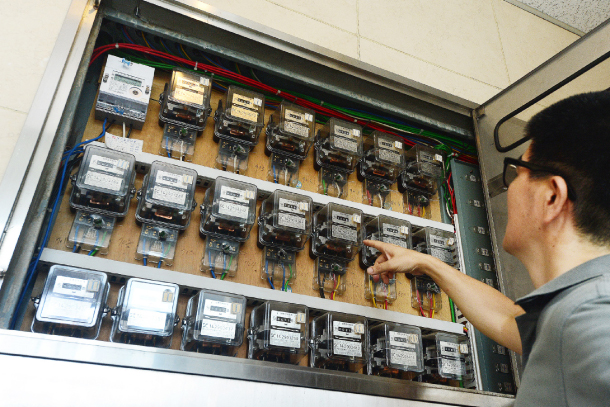 An electrician points at an electric meter of a low-rise apartment in Seoul on Monday. [NEWS1]

Korea is considering an overhaul of its electric billing system that could jettison the scale that makes power hogs pay more per unit.

A consultative body announced Monday alternatives to the current progressive payment system, in which electricity rates rise with the amount used, at a meeting organized by the Ministry of Trade, Industry and Energy and the state-backed electric utility Korea Electric Power (Kepco).

At the meeting, Park Jong-bae, head of the group and an energy systems professor at Konkuk University, suggested three proposals: a flat-rate system throughout the year; regular discounts during the summers; or streamlining the existing three billing rates into two during the summer.

The Trade Ministry said the consultative body would recommend changes to the billing system to Kepco based on expert discussions and feedback from the public, and the government will finalize a billing system by the end of this month.

Currently, household electricity bills are divided into three rates, in which the heaviest users are billed at a rate three times greater than the lowest users. The system has prompted complaints that the rates were too high for the highest category now that more Koreans are heavy users.

The progressive system was created over 40 years ago to reduce the burden on low-income households. Complaints rose last year as temperatures reached their highest levels in 111 years.

“Implementing a flat rate will fundamentally resolve the progressive rate controversy,” said Park at the announcement.

Opponents of the progressive rate have argued that middle-class Koreans have enough electrical appliances like air conditioners to make them heavy users. In the past, only the upper-middle class and the rich were heavy users.

Around 14 million households would see their electric bills rise.

The two other proposals maintain the progressive billing structure, but with modifications.

According to the Trade Ministry, implementing a regular discount during summers would lower electric bills for 16.3 million households, while altering the billing system into two rates instead of the current three will benefit over six million households.

As the latter plan abolishes the top usage category, it would resolve much of the controversy over the high billing rate. The Trade Ministry, however, added that the proposal would only benefit those who use the most electricity.