Opening a chicken shop may not be the best idea

Opening a chicken shop may not be the best idea 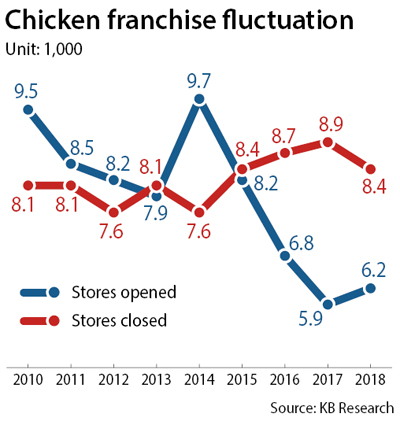 Opening a fried chicken joint has long been considered a safe bet for retirees in their 40s and 50s as the dish’s popularity in Korea appeared to be a guaranteed success - or at least a chance to make ends meet.

But KB Research, the research institute of KB Financial Group, warned that is not always the case, since the number of chicken outlets closed outnumbers new restaurants.

A somber fact is that the gap is widening in recent years.

However, the number of stores opening surpassed those closing in the early 2010s, so supply appears to have only recently surpassed demand.

By region, Gyeonggi has the most franchised chicken shops, followed by Seoul. Suwon in Gyeonggi also ranked highest among the regions that saw the largest number of stores that opened between 2014 and 2018. During this period, 784 stores were opened in Suwon alone. Cheongju in North Chungcheong came in second with 737 stores and Bucheon in Gyeonggi took third place with 698 stores.

But these were also the locations that saw the largest number of stores close. Bucheon ranked highest with 988 stores, while Suwon came second with 898. Cheongju ranked fourth after Daejeon.

There are more than 400 chicken franchises nationwide and more than 43,000 individual stores, according to data from the Fair Trade Commission. That is more than the number of McDonald’s restaurants in the world, at 36,000 according to the McDonald’s website.

BBQ Chicken has the most stores, with 1,659, followed by BHC with 1,456. Third place is taken by Pelicana, followed by Nene Chicken.

The report said one of the biggest reasons these chicken stores run out of business is because of rising competition.

In the case of the commercial district around Suwon City Hall, last year alone five new chicken stores opened. But because of the additional competition, sales have dropped 19.5 percent. The situation is similar in other areas including Samgok-dong near Bucheon University. As of March this year, there are 50 chicken stores around the campus, but compared to the previous year, the stores’ sales are down 18.8 percent.

Despite the market saturation, chicken shops still remain the top choice for self-employed men. Of the 116,000 franchised restaurants, 25,000, or 21.1 percent, serve fried chicken as of 2018.

In describing general trends in the self-employed restaurant business, the report also pointed out that more people under 30 are opening their own restaurants.