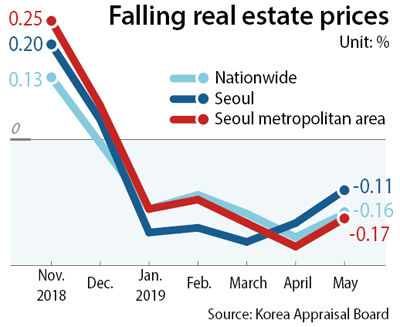 Residential real estate prices nationwide continued to fall for the sixth consecutive month in May after the government’s announcement last month of new developments near the capital.

According to a Korea Appraisal Board (KAB) report released Monday, the housing sales price index, which tracks average sales prices, fell 0.16 percent nationwide in May compared to the previous month.

The overall index has been on a downward trend since last November, when it recorded a rise of 0.13 percent.

Meanwhile, the Gyeonggi region, where the government announced plans for new developments, fell 0.25 percent in May from the previous month.

The price index for Seoul fell 0.11 percent in the same period.

The KAB explained in the report that the government’s drive to increase supply in the capital region led to the fall along with its strong mortgage restrictions.

Strict mortgage regulations implemented last September, including restrictions on multiple homeowners, also depressed the market, according to the KAB.

KAB’s jeonse index for May in the capital metropolitan region fell 0.21 percent from the previous month. It fell 0.22 percent nationwide over the same period.

Despite the falls in sale and jeonse prices nationwide and in the capital metropolitan region, the KAB said the rate of the falls slowed last month.

The decline in sales prices in April nationwide was 0.21, which narrowed to 0.16 in May.

Prices for jeonse in certain areas last month rose due to seasonal increase in demand.

“Due to the spring moving season, certain regions that have good transportation and schools saw [jeonse] prices rise and the rate of drop decreased in Seoul, Incheon and Gyeonggi compared to the previous month,” said the KAB.

The jeonse index for Seoul’s Songpa District, one of the regions that led a housing rally last year, rose 0.16 percent.

Meanwhile, stand-alone house sales prices rose across the board by region. The price index for apartments nationwide dropped 0.32 percent compared to the 0.25 percent rise for single-unit homes.