OH WON-SEOK
The author is a reporter at the JoongAng Ilbo.

May in Ulsan was a month of discord. It left wounds here and there. They are traces left by a union physically stopping a shareholders’ meeting on the division of Hyundai Heavy Industries on May 31.

As 5,000 union members tried to occupy the meeting hall, they clashed with company staff and 5,000 police. Yet the government was nowhere to be found. I could not understand the government’s actions, as it issued a statement after the union’s effort to stop the meeting failed and the division of the company was finished.

The Ministry of Trade, Industry and Energy, which oversees the shipbuilding industry, did not have a presence there. A ministry official said it was inappropriate for the ministry to express an opinion on an issue related to the management process of a private company. The Ministry of Employment and Labor was helpless. A source from the ministry’s Ulsan branch office said he visited the management and labor union of Hyundai Heavy Industries twice in May and advised the union to remove unlawful elements, as it lacked the procedure for labor disputes and going on strike could be illegal. 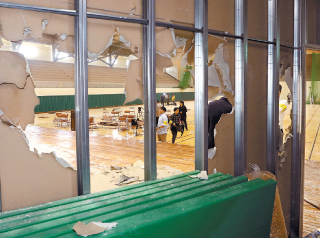 Under the union act, labor disputes are only allowed for the purpose of improving labor conditions or wages. The strike was technically illegal, as it intervened with management rights. Even when an illegal strike was expected, the ministry did nothing.

Deputy Prime Minister for the Economy and Finance Minister Hong Nam-ki said that a series of unlawful situations were undesirable, as the union made moves to oppose the shareholders’ meeting.

Labor Minister Lee Jae-gap’s attitude was the epitome of a laid-back government. On the day of the shareholders’ meeting, he attended a meeting with 15 heads of local employment and labor offices. In that meeting, he stressed that any acts of violence by the union were unjustifiable. He said the union needed to make demands within the boundaries of the law, and the ministry would work with related agencies on unlawful acts. While it was a warning against the Hyundai union’s illegal strike, it came two hours after the union was confronted by the police. The union occupied the meeting hall and clashed in the afternoon of May 26. That’s why Lee’s remark about strict action against the union was criticized: it was 96 hours late.