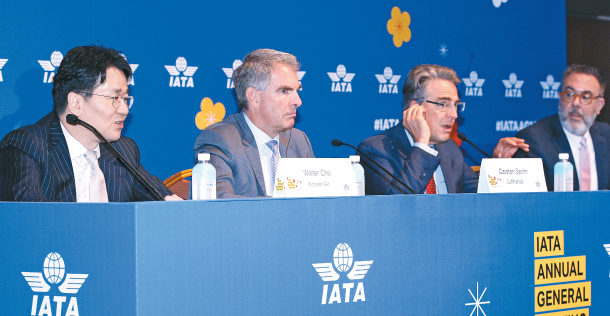 Hanjin Group Chairman and Korean Air President Cho Won-tae says the power succession within the group is going well, although discussions between family members have not yet come to an end.

Cho’s comments came during a press briefing with international media held in Seoul on Monday, his first official briefing since being named chair of the board at Hanjin Kal, the holding unit of Hanjin Group, in April following the sudden death of his father Cho Yang-ho earlier that month.

“The late chairman didn’t have a chance to leave many words for us because of his sudden death, but what he had been telling us is to protect the company in harmony as a family,” Cho said. “Based on his will, our family is actively talking, though I cannot say that our discussion is complete. I can say no more, but good progress is being made and I hope you can wait and look forward to more results.”

Even after Cho was named chairman, there were still questions over whether he could keep a stable grip over the group without falling out with his sisters - Cho Hyun-ah and Cho Hyun-min - both of whom are notorious for abusing their power over employees. He also needs to figure out a way to pay the heavy inheritance tax while keeping a significant stake in the group’s holding unit for stable ownership.

Cho and his allies currently hold 28.93 percent of Hanjin Kal, while the second-largest shareholder Korea Corporate Governance Improvement (KCGI), a homegrown activist fund, holds a 15.98 percent stake in the company, according to a spokesperson from Hanjin Group Monday.

Regarding questions over whether he and Hanjin Group had found ways to pay the inheritance tax while keeping a controlling share, Cho said he could not give any answers as he “is afraid the answer might influence the share price.”

As for disputes with KCGI, which has been aggressively demanding corporate governance reform at Hanjin Group, Cho said “KCGI is our shareholder - one of the biggest - but no more or less than that.”

He said he and the company haven’t had contact with representatives from KCGI in any way to negotiate on management issues since the end of last year. The chairman, however, said he cannot share details regarding the company’s plan on how to respond to KCGI, which has been aggressively expanding its shares in Hanjin Kal to have a stronger say against the Cho family. Though he avoided discussing the most controversial issues surrounding Hanjin Group, he did share his brief vision in leading the group in the future.

“I will continue to carry on the foundation spirit of my predecessors - to provide transportation service for my country. That management philosophy will not change significantly,” he said. “But if there is anything that needs to change, I will consult with my executives to bring change.”

He said that he is aware of complaints from cabin crew regarding their working environment, mainly due to a shortage in workforce.

“I have heard of the problems and I am aware, but I agree that I haven’t been able to bring recognizable change yet due to various recent issues such as preparing for the annual general meeting of International Air Transport Association and the [passing] of my father,” Cho said. “But our recent plan to reduce first class seats in part of our fleet, for instance, was made not to lower our service level but actually to make things more convenient for cabin crew by simplifying the class of the seats.”

He promised to make further changes to satisfy the workers at Korean Air, as the airline’s chief. He also vowed to come up with a more aggressive plan to compete with low-cost carriers.

“We have, in the past, been very passive in dealing with and confronting low-cost carriers. Now they are interfering with our side of the business and it’s been [growing rapidly].”

Cho said he will take a different stance in the future.

During the press briefing held after the closing of International Air Transportation Association (AITA) annual general meeting (AGM) on Monday, Cho gave answers both in Korean and English for reporters from home and abroad. Korean Air was the host of the AGM held for the first time in Seoul. With Cho elected to the Board of Governors of IATA on Sunday, he vowed to participate actively like his father, sharing his reminiscence.

“Whenever somebody calls me chairman, I look to the side, feeling like my father would still be there,” he said. “I have accepted the role for the future of the company, but I still feel empty in my heart.”