Hyundai’s EVs may be forced to run on Chinese batteries

Hyundai’s EVs may be forced to run on Chinese batteries 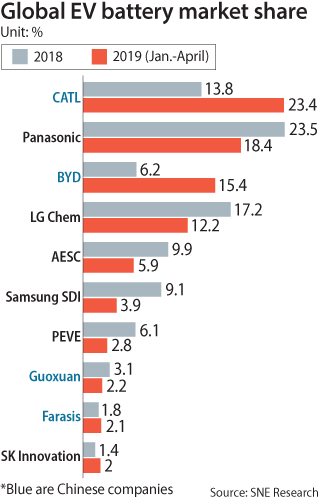 Hyundai Motor, which has been struggling in the Chinese market, will start using Chinese lithium batteries in the electric vehicles (EVs) it sells there later this year.

The decision owes a lot to the subsidies given to Chinese battery manufacturers by Beijing.

Hyundai Motor’s subcompact electric SUV Kona, which will be sold in China under the name Encino, will have batteries supplied by China’s Contemporary Amperex Technology (CATL).

Until now, all Hyundai Motor EVs used batteries by Korea’s LG Chem. LG Chem batteries are known to be high quality and the company works closely with automakers from the R&D stage.

The Chinese government has been trying to limit the entry of Korean batteries through the subsidies it has offered Chinese automakers since 2016.

But ultimately, those cars were denied Beijing’s subsidies.

Hyundai Motor is suffering major losses in the Chinese market that resulted in a major restructuring, including shutting down one of its plants in Beijing and cutting back production in another.

The joint venture Beijing Hyundai was only able to sell 46,070 vehicles in May, a 34.2 percent decline compared to the same month a year ago.

Hyundai Motor needs to pump up its EV sales as the EV market in China is booming.

The Chinese government’s new energy vehicle (NEV) policy also affected Hyundai Motor’s recent decision. This year, environmentally friendly vehicles have to account for 10 percent of all vehicles manufactured. Next year, that ratio will be raised to 12 percent.

If an automaker fails to meet the requirement, it will be penalized.

Other than the Avante HD, which is sold as Yuedong in China, and the hybrid Sonata LF, Beijing Hyundai has no vehicles that can be labeled NEV. Its other models are diesel or gasoline.

More environmentally friendly models are planned for China sales including Encino, which will go on sale in the second half of this year, and eventually the Avante AD plug-in, sold under the name Lingdung.

The company is also reported to be considering selling an EV model of its midsize sedan Lafeta in China.

But Korean battery companies are not happy.