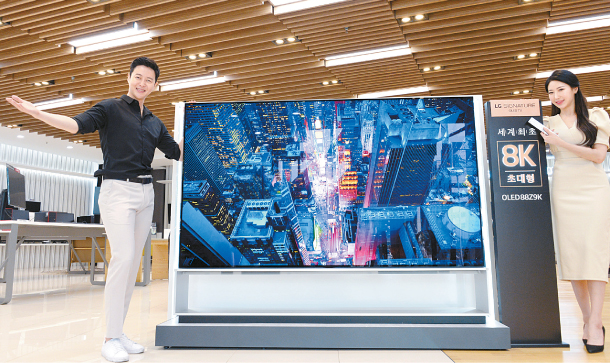 The TV will have an 88-inch screen and will be part of LG’s high-end Signature series of appliances. LG will start accepting orders in June and offer a discount price of 40 million won ($33,841) per unit.

The original price is 50 million won.

Sales in the United States and Europe will start in the third quarter.

The TV will come with a processor that automatically converts lower resolution videos to 8K quality using deep learning technology.

Because of this technology, potential buyers don’t have to worry so much about a dearth of 8K resolution content to watch on their new sets.

As the television also supports surround sound, the processor will optimize a video’s sound file so it feels like it comes from five directions, according to LG. A Google Assistant that supports the Korean language is also included so the television can be used to control other smart appliances in the house.

For LG, the launch signals its entrance to the 8K resolution battle, which Samsung Electronics is currently leading. Samsung released its first line of 8K QLED TV last October. The largest is 98 inches.

LG’s advantage is its OLED panels. OLED screens don’t require backlights like QLEDs but have chemicals that emit light on their own.