‘Parasite’ takes No. 1 with 2.7 million ticket sales: ‘Aladdin’ drops to 2nd while ‘Godzilla’ and ‘Gangster’ fall down list

‘Parasite’ takes No. 1 with 2.7 million ticket sales: ‘Aladdin’ drops to 2nd while ‘Godzilla’ and ‘Gangster’ fall down list 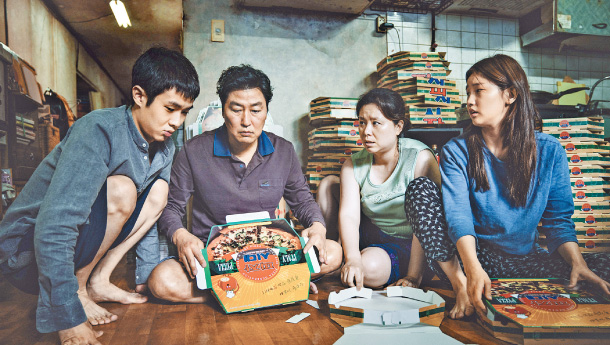 Director Bong Joon-ho’s Palme-d’Or-winning film “Parasite” landed No. 1 on the local box office for the weekend, with moviegoers curious to find out aspects of the film that impressed the juries and the international audience at the 72nd Cannes Film Festival. [CJ ENTERTAINMENT]

Other films had to make way as the Palme-d’Or-winning “Parasite” shot to the No. 1 spot from the day of its release last week, staying at the top throughout the weekend.

Over 2.7 million moviegoers have already seen Director Bong Joon-ho’s tragicomedy on 1,947 screens this weekend, according to charts from the Korean Film Council.

The film is about two opposite families - one rich, one poor - who are unlikely to ever cross paths, but happen to meet through Ki-woo, the eldest son in the poor family. He starts tutoring the daughter of the rich family and eventually gets his whole family working for them.

Although there are no real “villains” in the story, audiences are buzzing over the shocking ending and local social media is flooded with theories about the metaphors and hidden meanings that Bong put in his film.

Meanwhile, the live-action version of “Aladdin” shuffled down to second place with 737,000 moviegoers watching the film on 994 screens. Although predictable, Disney fans still seem to enjoy Will Smith’s sassy version of Genie and the feminist tweaks the company blended into the story.

The film is about a young street rat, Aladdin, who comes across a magic lamp containing Genie, who grants him three wishes that he uses to impress princess Jasmine. The musical film will have audiences wishing for a sing-along version as well.

“Godzilla: King of Monsters” debuted in third place with a mere 181,000 moviegoers watching the film on 620 screens. The monster-packed film failed to impress the local audience despite the star-studded cast, including Millie Bobby Brown from the popular Netflix series “Stranger Things,” Bradley Whitford, Sally Hawkins and more.

The film describes when an age of gigantic monsters roam the Earth, destroying everything they see. Humanity lies in danger until a glimmer of hope is found by cryptozoological agency Monarch, which discovers a frequency that lets humans and monsters communicate.

Ma Dong-seok’s crime-action film “The Gangster, The Cop, The Devil” slowly slid down to fourth. The film sold an estimated 160,000 admissions at 620 screens. Featuring as a gangster boss in the story, Ma still becomes the hero, determined to catch a serial killer who had the guts to stab him.

Horror film “0.0MHZ” debuted in fifth place, selling 63,000 tickets at 409 screens. Featuring singer-turned-actors Jung Eun-ji from K-pop girl group Apink and Lee Sung-yeol from boy band Infinite, they are part of a club that goes into a haunted house to summon a ghost. Yet it seems that the local audiences were not that impressed by the plot.

“[After all this fuss is over], I just want to be forgotten again,” director Bong said during a press interview last week. After winning the acclaimed award, he said that now he feels a bit overwhelmed by all the attention. Nevertheless, it looks like “Parasite” will be in cinemas for quite some time, as the hype surrounding the film continues to grow, both thanks to word-of-mouth recommendation and the prestigious honor of the Palme d’Or.