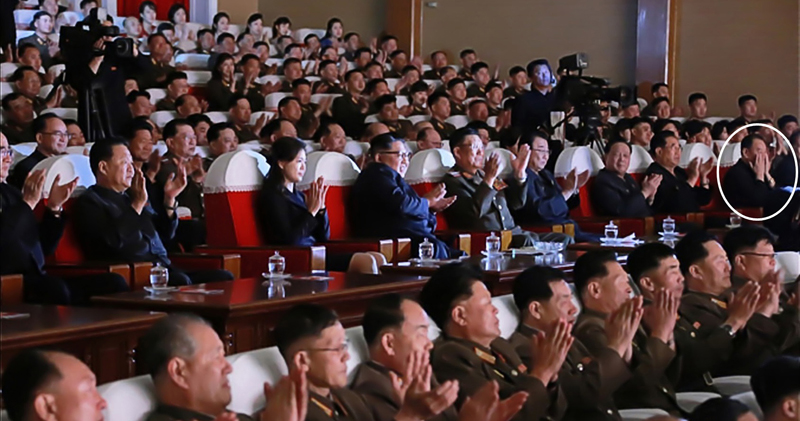 North Korean leader Kim Jong-un attends a performance by soldiers on Sunday, the North Korean Central News Agency reported Monday. Kim Yong-chol, a senior official of the Workers’ Party who was suspected of having been purged from the inner circle, also attended. Kim Yong-chol is marked inside the white circle in the photo. [YONHAP]

North Korea’s lead negotiator in nuclear talks reappeared Sunday, contradicting news reports that he was purged and sent to a camp.

According to a Korean Central News Agency (KCNA) report Monday, North Korean leader Kim Jong-un and his wife Ri Sol-ju attended a performance by soldiers on Sunday and Kim Yong-chol, vice chairman of the Workers’ Party, was in his entourage.

The Chosun Ilbo, a conservative South Korean daily, reported last week that North Korea had carried out executions and political purges of elite officials who handled nuclear negotiations in the months leading up to the failed North-U.S. summit in Hanoi, Vietnam, in February.

The newspaper said Friday Kim Yong-chol, the former counterpart of U.S. Secretary of State Mike Pompeo, was sent to a camp in Chagang Province near the Chinese border for forced labor and ideology re-education, quoting a North Korean source. It said he was being punished for the failure of the summit.

In the same report, it said that Kim Hyok-chol, North Korea’s special representative for U.S. affairs, and four senior officials of the Foreign Ministry were executed at Mirim Airport in Pyongyang, quoting the same North Korean source.

Kim Yong-chol(‘s) appearance Sunday contradicted that report, although it was his first appearance in the stat media in more than 50 days. Other top officials watched the performance with the North Korean leader, according to the KCNA.

Speculation about Kim Yong-chol being purged ran high after South Korean intelligence authorities said in April that he was dismissed from his post as head of the Workers’ Party’s Unification Front Department (UFD), which handles inter-Korean affairs and negotiations with the United States. He was replaced by Jang Kum-chol. The KCNA report Monday demonstrated that Kim maintained his title of vice chairman of the Workers’ Party and remained an elite member of the regime.

Kim made his last public appearance at a Supreme People’s Assembly meeting on April 12. He was absent from the departure of North Korean leader Kim to Russia on April 24 for a summit with President Vladimir Putin, fueling speculation about his downfall.

A source informed about North Korea affairs, however, told the JoongAng Ilbo on Monday that Kim Yong-chol visited China in late April for 15 days and received medical treatment. He is suffering from diabetes and a tumor that required a visit to China, the source said.

“His status is not as powerful as what it used to be before the Hanoi summit, but he was not punished or demoted,” the source said. “His health condition could have been a reason that he stepped down as the head of the UFD.”

Rumors also spread in the intelligence community that Kim Yong-chol visited China with Kim Hyok-chol shortly after the North-U.S. summit in February to explain what happened. “We also have intelligence that Kim Hyok-chol was spotted in public in April,” said Cheong Seong-chang, Vice President of Research Planning at the Sejong Institute.

It is possible that Kim Yong-chol’s standing within the Workers’ Party has fallen. North Korean media listed his name last among the vice chairmen of the party who accompanied Kim Jong-un to the performance, indicating a (diminution).

At the time of the Hanoi summit, Kim Yong-chol was ranked in North Korean state media reports ahead of Ri Su-yong, the regime’s foreign minister. But on Monday, new members of the Politburo members who were appointed in April were mentioned before Kim Yong-chol.

“In the North, the order you appear in a state media report indicates your rank,” said a South Korean government official. “Kim Yong-chol should have been listed before the new Politburo members. We need to wait and see to see if there really was a change in the ranks.”

North Korean leader Kim continued public activities for three days in a row, focusing on domestic affairs. After 22 days out of sight -- since his overseeing of launches of missiles on May 9 -- Kim resumed his public activity on Friday with a factory inspection in Chagang Province. Kim visited six other places, mostly military factories, by Saturday.

Conspicuously missing, however, was Kim Yo-jong, the North Korean leader’s younger sister. She did not accompany her brother to Sunday’s art performance, but Kim Ki-nam, adviser to the Propaganda and Agitation Department, made a rare appearance.

“Director of the Propaganda and Agitation Department Park Kwang-ho suffered a stroke late last year, and he returned to the job after treatment,” another government official told the JoongAng Ilbo. “But the workload was too heavy, and Kim Ki-nam appeared to be helping with the job.”

A senior lawmaker in the South said Monday that Kim Yo-jong is keeping low profile, because the mood is not sanguine in Pyongyang. “Some said she was exhausted from work, but I have information that she is just staying quiet,” Rep. Park Jie-won of the Party for Democracy and Peace, who acted as a key envoy to North Korea during the Kim Dae-jung administration, in an interview with KBS radio.

“As far as I know, she is not making public appearances because the [summit] was not a success,” he said. “She is the one and only younger sister of the North Korean leader and a member of the Paektu bloodline [of the North Korean ruling family]. I was told that there is no abnormality in her status.”

Regarding the Chosun Ilbo report about the execution of Kim Hyok-chol and purge of Kim Yong-chol, Park said it was not trustworthy. “The Korean and U.S. intelligence authorities said it was unconfirmed, so I think we should trust their announcements,” Park said.

“If Kim Yong-chol was sent to a labor camp and Kim Hyok-chol and Kim Song-hye were executed, and if something happened to Kim Yo-jong, that would signify a very big change. It is impossible for the Korean and U.S. intelligence authorities to miss it.”