Progress made on operational control transfer

Progress made on operational control transfer 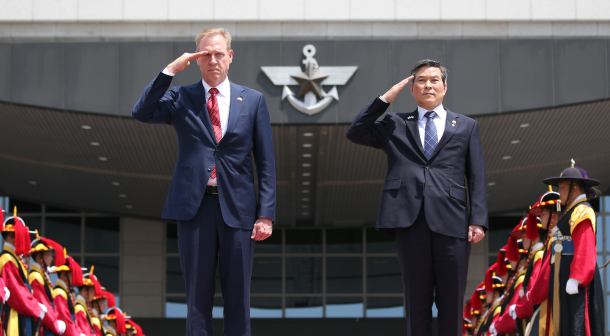 Korean and American defense chiefs agreed Monday that Seoul has made significant progress in its preparations to take over wartime operational control of its troops, fueling anticipation that the transfer might be possible by the end of Moon Jae-in’s term in 2022.

Defense Minister Jeong Kyeong-doo and acting U.S. Defense Secretary Patrick Shanahan held a meeting at the Ministry of National Defense in Seoul on Monday and discussed issues involving the two countries’ military alliance and efforts to denuclearize North Korea. They reached agreement on some aspects of the Korea-U.S. Combined Forces Command (CFC) after Korea assumes wartime command over its troops in the coming years.

According to a joint press statement released by the Defense Ministry, the two sides agreed that a Korean four-star general will head a new Korea-U.S. joint military command after the wartime control transfer. The two countries also agreed that the CFC will move to an American base in Pyeongtaek, southern Gyeonggi.

Jeong and Shanahan agreed Monday that “significant progress” is being made to fulfill the conditions for Seoul to take over wartime control. The two countries agreed in 2014 that the transfer would be made when conditions are met. For the transfer, Korea must secure military capabilities to lead the allies’ joint defense posture and initial readiness against North Korea’s nuclear and missile threats. A proper security environment was also agreed as a condition.

Although Seoul has operational control over its troops in peacetime, Washington has control of Korean troops in war. Korea gave control to the United States in July 1950, shortly after the Korean War began. In 2007, Seoul and Washington scheduled the transfer of wartime control for 2012, but Moon’s two conservative predecessors - Lee Myung-bak and Park Geun-hye - both postponed it. Moon is pushing for an early transfer, possibly by the end of his term.

Jeong and Shanahan agreed Monday to hold the first test of Korea’s readiness to assume wartime control through a command post exercise led by the Korean military this August.

Today, a four-star U.S. Army general serves as the commander of the CFC, U.S. Forces Korea and the United Nations Command.

They also agreed that the CFC will be moved to Camp Humphreys in Pyeongtaek, 70 kilometers (43 miles) south of Seoul. During the Park administration, Seoul and Washington agreed that the CFC would move to the Korean Defense Ministry’s compound in Yongsan. That plan was reconsidered since last year at the request of U.S. Forces Korea Commander General Robert Abrams.

A Defense Ministry official said Seoul and Washington agreed to accommodate the request, taking into account the efficiency of operation and the expenses of relocation.

Today, the command offices of the U.S. Forces Korea, UN Command and the U.S. Eighth Army are all inside Camp Humphreys. General Abrams spends only two days a week in Seoul. After the CFC is moved to Pyeongtaek, its site will be redeveloped as part of Yongsan Park.

“The Korea-U.S. combined defense posture will be maintained strongly amid the changing security situations,” Jeong said in opening remarks to the talks with Shanahan. “The Korea-U.S. alliance will evolve and develop into a more mature, stronger and complementary relationship. The U.S. Forces Korea is the symbol of the alliance, and it will always be with the Korean military.”

Jeong also said the Defense Ministry of Korea and the Defense Department of the United States completely agree that they will militarily support the ongoing diplomatic efforts to denuclearize North Korea.

In his opening remarks, Shanahan praised the Korea-U.S. alliance. “Amidst this ever-changing world, one thing remains unchanged: Our iron-clad alliance is a linchpin of peace and security both on the Korean Peninsula and in Northeast Asia,” he said. “Together, we’ll continue to monitor challenges North Korea poses to our mutual safety.”

“The only acceptable end-state is complete, verifiable denuclearization of the peninsula,” Shanahan said.