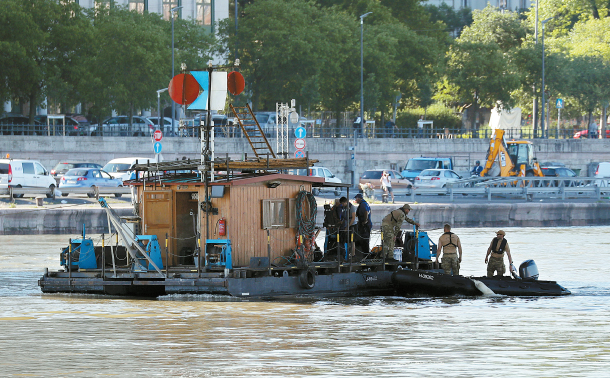 Hungarian soldiers prepare to dive in the Danube River in Budapest on Monday to search for a sunken sightseeing boat. [NEWS1]

President Moon Jae-in on Monday called for a “close cooperation system” with the Hungarian government and support for victims’ families as he received a briefing from his foreign minister on the fatal sinking of a boat carrying Korean tourists in Budapest last week.

Foreign Minister Kang Kyung-wha reported to the president at the Blue House after returning from a visit to Budapest to oversee the rescue operations following the sinking of the sightseeing boat on the Danube River in Hungary Wednesday evening. The disaster left at least seven Koreans dead and 19 more missing.

The Hableany capsized shortly after a larger tour boat, the Swiss-registered Viking Sigyn steered by a Ukrainian captain, hit the sightseeing boat carrying 33 Koreans, mostly tourists and their guides, as well as two Hungarian crewmen. Seven people were rescued, but the 19 Koreans and the two Hungarians still remain missing and search operations are ongoing.

In the meeting of close aides, Moon called to “for efforts to fully respect the opinions of the family members and provide support without a hitch,” according to Ko Min-jung, the Blue House spokesperson.

Kang said she stressed to Hungarian officials the Korean government’s “keen attention and commitment to the search for the missing victims, the salvaging of the sunken boat and investigating who is responsible for the accident.”

The minister added that she has asked for support from neighboring countries for continuous search efforts and for family members to be briefed on the most recent information daily.

Immediately after the sinking, Kang was named head of the relief headquarters on Thursday and flew to Budapest Friday to oversee the search and rescue operations. She returned to Seoul on Sunday.

Earlier on Monday, Kang held an interagency teleconference meeting and pledged to further strengthen cooperation between Hungary and other nations on the Danube, such as Serbia, Romania and Bulgaria, to make progress in the search for the missing victims. On Monday morning in Hungary, a joint rapid response team dispatched by the Korean government attempted underwater search operations in the river after receiving approval from Hungarian authorities earlier that day. A Korean diver entered the river to scout the situation first that morning. Yet Hungarian authorities later determined that the situation was not safe enough to carry out underwater search operations.

Col. Song Soon-geun, a Korean official heading the joint rapid response team in Hungary, said Sunday that they conveyed to the Hungarian government that the divers will attempt underwater search operations on Monday and that if they fail, they will cooperate with the boat salvaging efforts. Song said Monday that the Hungarian officials said that the ship salvaging efforts could begin as early as Wednesday and be concluded by next Monday.

The Hungarian government has pushed to quickly salvage the sunken boat because they determined that it will be difficult to carry out diving operations, considering the water depth and rapid currents of the river. Yet the Korean team said their divers gained experience and skills from the Sewol ferry disaster in 2014, and asked for the opportunity to try to search for the missing victims before the boat is lifted. The Hungarian government already attempted diving operations twice on Friday but faced dangerous conditions. The Korean government has been concerned that moving to salvage the boat could lead to damaging the vessel, and requested time for divers to carry out underwater search operations.

Monday marked the first time since the sinking of the boat that Korean divers attempted an underwater search.