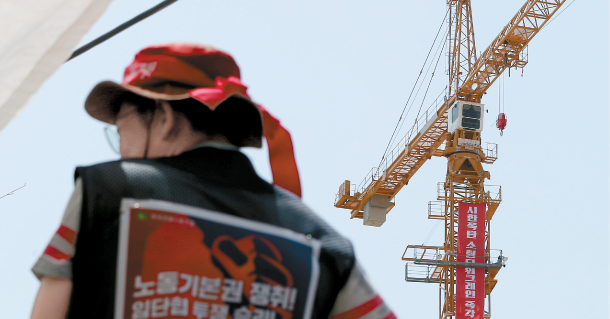 A tower crane union member stands near a tower crane at a construction site in Ulsan on Tuesday. The Federation of Korean Trade Unions and the Korean Confederation of Trade Unions ordered their members Monday to occupy all tower cranes nationwide until their demands on wages and working conditions are accepted. [YONHAP]

Operators of manned cranes have gone on strike to protest the rising use of unmanned cranes.

It is the first time Korea’s two crane operator unions have stopped work simultaneously, bringing construction virtually to a halt in the country.

The Federation of Korean Trade Unions (FKTU) and the Korean Confederation of Trade Unions (KCTU), two major umbrella labor groups, ordered their members Monday to occupy all tower cranes nationwide until their demands on working conditions and wages were accepted.

“We have decided to bring our full-scale strike a day forward.”

The nationwide strike effort was already expected, as both unions agreed in votes last month to launch strikes. On May 12, 86 percent of FKTU members voted to strike, while nearly 60 percent of tower crane labor union workers at the KCTU also voted to strike.

In a separate effort, the two labor union groups are planning to hold two day-long rallies in front of government buildings. The FKTU will rally in front of the government complex in Sejong, and the KCTU will be protesting near the Blue House and the National Assembly.

The labor groups are also asking for better safety standards and better policing of illegally-operated tower cranes as well as a 7 to 8 percent increase in wages.

They believe the smaller-sized unmanned tower cranes being increasingly used at construction sites are more dangerous than large-sized tower cranes.

The Construction Association of Korea disputed the claims, saying that small-sized tower cranes are safer, as pilots are operate the cranes from a safe distance.

It also contends that there have been fewer accidents involving small-sized tower cranes compared to the larger cranes. Whatever the facts may be, the ongoing full-scale strikes from the umbrella labor union groups are presenting major problems for construction sites across the country.

“When tower crane operations are halted, construction projects take longer, which inevitably leads to a rise in construction costs and a decrease in product quality,” said a spokesperson for the Construction Association of Korea.

“It is also expected that move-ins will be delayed in case of apartment buildings.”

The labor union groups responded that they had no way of expressing their concerns other than by striking.

“It is regretful that ongoing construction projects are running into issues” from our strikes, said Jeon Jae-hee, an official from a construction union under the KCTU.

“We hope people understand our situation, as this is the only way we can express ourselves.”

The government is concerned and getting involved.

“We are concerned with how a strike by the tower crane labor union could cause chaos and workplace issues at construction sites,” said Minister of Land, Infrastructure and Transport Lee Jae-gap on May 31.

“We will actively support the Ministry of Employment and Labor, the Land Ministry and related entities to cooperate and resolve this issue through talks.”

The Land Ministry is preparing to release safety measures for tower cranes of all sizes by the end of this month. But it does not have anything in the works yet to resolve the ongoing full-scale strikes across the country.

“Negotiations between the unions and management are up to them,” said Park Jeong-su, the director of the construction industry division at the Land Ministry.

“We cannot accept their demands to abolish small-sized cranes, but we will keep listening to the opinions of labor to stop the strike from continuing.”

Some officials are blaming the Land Ministry for letting the dispute escalate to this level.

“It seems like the Land Ministry overlooked the seriousness of this situation and carelessly reacted, letting the dispute escalate to the current level,” said Rep. Lee Yong-ho, who serves as a member of the National Assembly’s Land, Infrastructure and Transport Committee.