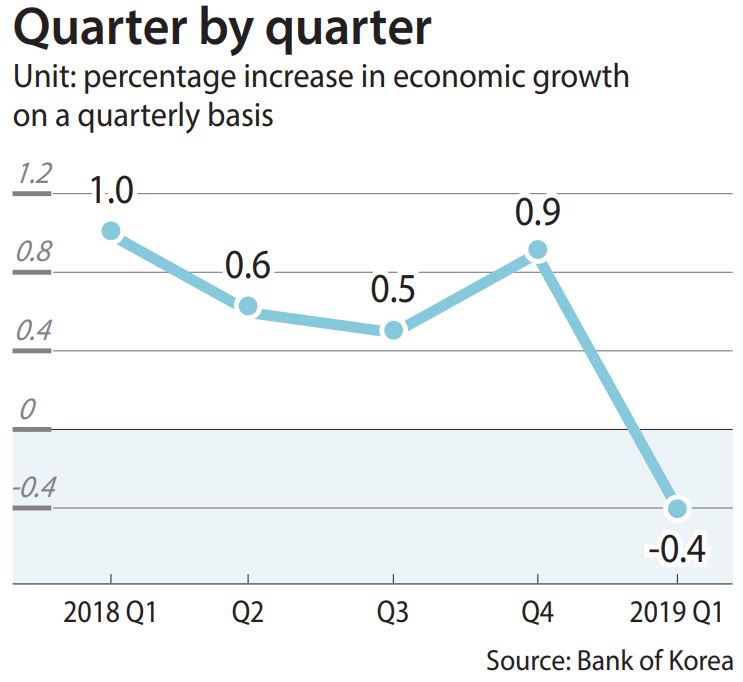 The central bank revised economic growth for the first quarter to its lowest level in a decade, raising worries that the slump is deepening.

According to a Bank of Korea (BOK) report on Tuesday, economic growth in the first quarter was negative 0.4 percent compared to the previous quarter.

The revision lowers the central bank’s estimate in April by 0.1 percentage points and is the lowest growth figure on a quarterly basis since the final quarter of 2008, which was during the global financial meltdown.

Slowing demand for electronics, especially semiconductors, led exports to decline 3.2 percent in the same period, according to the report, and also a 9.1 percent drop in facilities investment.

The sluggish economic situation is giving rise to worries about deflation as the consumer price index last month rose only 0.7 percent from the same month the previous year, remaining under 1 percent since last December, according to a Statistics Korea report released the same day.

This was the longest period the inflation rate stayed so low since 2015, when the country was affected by an outbreak of the Middle East Respiratory Syndrome.

Statistics Korea said that inflation remained low because prices for fuel and services fell. Consumer prices rose 0.6 percent on year in April. Prices for public services fell 0.2 percent in May from the previous year and prices of petroleum fell 1.7 percent.

The latest data adds pressure to the central bank to cut interest rates.

Last week, the bank’s monetary policy committee decided to freeze the key interest rate, although one board member voted to lower it.

Analysts are forecasting a rate cut in the near future.

“The BOK will likely shift its focus … to Korea’s economic slowdown,” wrote Kang Seung-won, an analyst at NH Investment & Securities, in a report. “We expect the BOK to cut the base rate in the fourth quarter of this year.”

Meanwhile, business and government-sponsored research groups have been trimming their expectations for the country’s economic growth this year. Many are lower than the government’s forecast of 2.6 to 2.7 percent.

The Korea Economic Research Institute (KERI) cut its forecast to 2.2 percent from 2.4 percent on Monday.