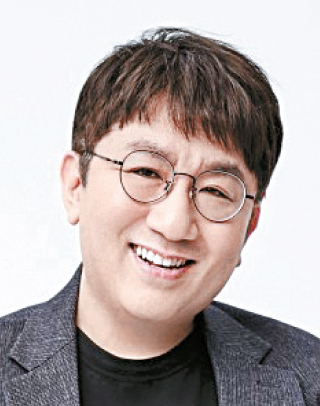 Local and foreign participants chose Bang Si-hyuk, CEO of Big Hit Entertainment, as the first Korean who comes to mind when thinking of the word “creator” in a survey conducted by the Corea Image Communication Institute (CICI).

A total of 341 Koreans and 265 foreigners in Korea participated in the survey and answered multiple-choice questions about Korea’s image at home and abroad. The results were announced on Tuesday at the annual Korea CQ Forum.

Bang has been put in the media spotlight as the man who made BTS into the most popular K-pop band in the world. Forty percent of foreigners in Korea and 55 percent of Koreans picked him as the most significant creator in Korea.

When participants were asked to select an aspect of local culture that is most competitive in the overseas market, both chose Korean food, while K-pop came in second.

As for the Korean cultural figures they would want to meet the most, the members of BTS were the most popular answer for both local and foreign participants.

In another section of the survey, participants answered that the most surprising element of Seoul was the coexistence of traditional and contemporary structures.

After that, 27 percent of foreigners in Korea said that they were surprised by the high level of fine dust that clouded the city’s skies, while 30 percent of local participants picked comfortable and clean public transportation system as the No. 2 aspect of the city they found most surprising. The severity of the fine dust situation was also a popular answer for Koreans, with 14 percent choosing the answer when asked what the most astonishing aspect of Seoul was.

The Korea CQ Forum was held at the Embassy of France in western Seoul. The event has been put on annually since 2006 to promote “quotients for creativity, communication, cooperation, concentration and culture,” aspects that the institution deems crucial to continue to build positive images of the country.