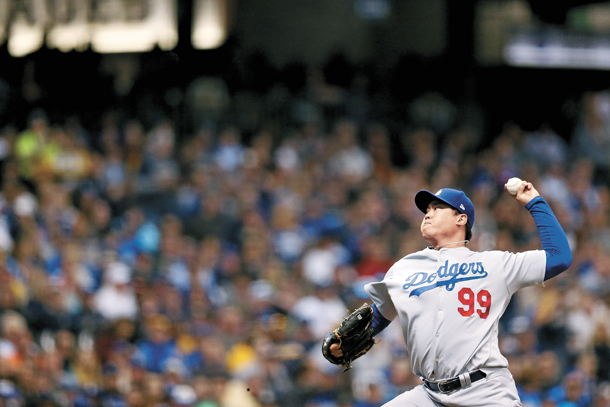 Ryu Hyun-jin throws a pitch against the Milwaukee Brewers at Miller Park in Milwaukee on April 20. [GETTY IMAGES/YONHAP]

By any measure, Los Angeles Dodgers starter Ryu Hyun-jin had an outstanding month of May. Now he has an award to prove it.

Ryu was named the National League (NL) Pitcher of the Month for May by Major League Baseball (MLB) on Monday. It’s the first monthly award for Ryu in his seven-year big league career and the 32-year-old is only the second Korean pitcher, after former Dodger Park Chan-ho, to take home the honor.

Ryu had an even better month in May this year. Ryu had a dominant May, with a 0.59 ERA across six games. He picked up five wins and a no-decision.

In 45 and two-thirds of an inning, Ryu struck out 36 and walked only three batters.

Ryu rode a 32-inning scoreless streak last month, a stretch that included a complete game shutout against the Atlanta Braves on May 7. He didn’t give up a run in four of his six starts in May. Ryu was also named NL Player of the Week on May 12.

Ryu’s achievement is also good news for the Dodgers as this is the first time since Rich Hill in July 2017 that a Dodgers player won the award.

Throughout six innings, Ryu gave up four hits and a run while striking out eight. Although the Dodgers’ bullpen gave up four more runs after Ryu left the mound, they still cruised to a big 12-7 victory to start the 2019 season.

Then he picked up another against the San Francisco Giants on April 2. Ryu gave up two runs in seven innings for another quality start and picked up his second win of the season. Interestingly, Ryu’s two runs were a home run from pitcher Madison Bumgarner. This was the first time since he joined the majors in 2013 that Ryu has given up a home run to a pitcher.

Although Ryu briefly left the Dodgers’ starting rotation because of a recurring left groin injury, he didn’t waste much time getting back on the mound.

As Ryu accepted a qualifying offer from the Dodgers after the 2018 season, this is perhaps one of the most important seasons for his career in the big league as he will become a free agent once it’s over. He is proving that his injury records should not be a concern based on his performance so far.

Looking at Ryu’s statistics this season, he is showing great control in his pitches, as he has only given up five walks while tossing 73 innings. In the 11 games Ryu started in, he has had quality starts in nine.

That performance has allowed Ryu to lead the NL with eight wins and have the lowest ERA in the entire MLB, at 1.48. He has yet to allow more than two runs in a game in 11 starts.

Based on such a strong performance, there has been talk that Ryu could make his debut in the All-Star game this year. He insists he is not yet thinking about that as there’s still a month to go.