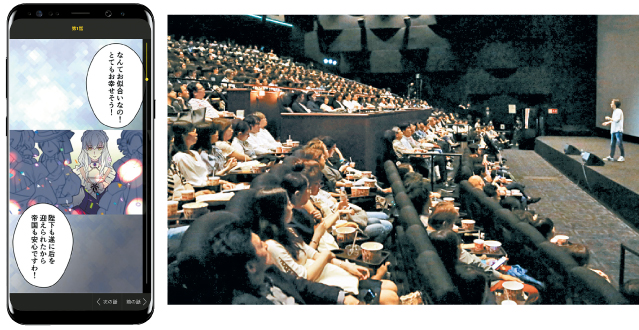 Left: A Korean webtoon translated in Japanese on Piccoma. Above: Representatives of the Japanese publishing industry listen to a speech by Kakao Japan CEO Kim Jae-yong in Tokyo on May 23. [KAKAO JAPAN]

Kakao is betting big on webtoons to help improve its popularity in the Japanese market.

Through its Japanese subsidiary Kakao Japan, Kakao is hoping to use manga subsidiary service Piccoma to boost the popularity of Korean webtoons in Japan.

Kakao isn’t the first Korean internet giant to take this approach. Portal website Naver found success through Line, its Japanese subsidiary, which also has a heavy focus on manga and webtoons.

Piccoma is a product of Kakao’s Japanese and Korean offices, which worked together to develop artificial intelligence algorithms used to analyze user data in the app.

Kakao also uses the app to actively promote Korean content - webtoons that prove popular on Kakao’s Korean portal website are also shared on Piccoma if the company thinks they will be popular with Japanese readers.

But the main business is offering Japanese content to Japanese readers.

When Piccoma celebrated its third anniversary at a movie theater in Tokyo on May 23, the 500 seats were filled mostly with representatives of the Japanese publishing industry.

Kim Jae-yong, who heads Kakao Japan, took to the stage to emphasize the win-win relationship between the Japanese publishing industry and Piccoma - webtoons offer a good opportunity for Kakao to promote Korean content, but these publishers are where the big business is.

Early on in its life, Kakao chose to grow Piccoma in partnership with the existing publishing industry. It worked.

Piccoma sales in the first quarter this year increased 32 percent than the previous quarter. Compared to the same period last year, the figure rose 173 percent. The amount of manga content available totaled 2,205 in April last year but has increased threefold to 6,727 this year.

Yet, it wasn’t successful from the get-go.

“When the service just started on April 2016, there were times when the number of users only were 15 a day,” Kim told the JoongAng Ilbo in an interview at Kakao Japan’s headquarters in Tokyo.

Currently, 2.2 million people on average use the service every day. The key is the cooperation between the major publishing companies and the writers.

Kim said that, since the launch of the app, he has actively met major manga publishing companies and writers. This is because without the trust of the content providers, he thought he would not be able to offer a well-made service. Kim formed good relationships with around 120 publishing companies.

Piccoma’s choice to coexist with the publishing industry was based on the numbers. The Japanese manga industry is worth 5 trillion won ($4.2 billion) and 3 trillion won of that comes from paper books. It is common for writers to permit their manga to be published serially on the app only after their work is published as a book first.

“I explained that our app is helpful for the existing industry as it can induce female customers in their teens to 30s who do not read manga via paper books,” said Kim.

Kim also said that opting for cooperation, not competition, with publishing companies is because they share a customer base - among app users, 75 percent also read paper books.

Recently popular manga “Become You,” written by Ichigo Takano, is the best example. Kakao Japan published the three editions of the manga in three pamphlets and distributed them at no cost. Considering the major target audience of the manga is female high school and university students, it put pamphlets together with sheet masks in sets.

Publishing companies and writers reacted favorably to the manga app. Recently, Leiji Matsumoto, the writer of “Galaxy Express 999,” began exclusively publishing his new manga series on Piccoma. “Writer Matsumoto, who is over 80 years old, said that the platform is a fresh opportunity,” said Kim.

The AI algorithms designed at Kakao’s headquarters in Pangyo, Gyeonggi, also proved helpful. The algorithms classify subscribers into eight groups by gender, age and preference. Based on who reads each manga, the companies analyze preferences and recommend the most appropriate content to readers in a variety of ways.

The AI analysis is conducted in Pangyo.

Piccoma’s goal is to raise its profile not only in the app market but also in the Japanese webtoon market.

“Japanese publishing companies are making offers to go global with us,” said Kim. “By cooperating with the publishing industry and writers, we will enter the global market.”