Stolen treasures come to light after investigations: After a decade, missing items tend to turn up at antique auctions

Stolen treasures come to light after investigations: After a decade, missing items tend to turn up at antique auctions 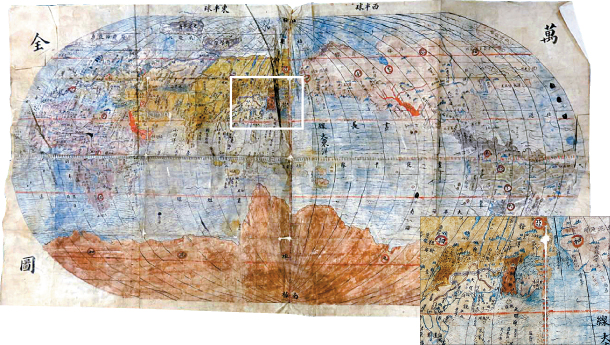 Manguk Jeondo, the oldest world map existing in Korea, Treasure No. 1008, was stolen in 1994 and hidden behind a wall for 25 years. The police and the Cultural Heritage Administration managed to bring it back. The inset picture, right, shows the map of Korea. [SEOUL METROPOLITAN POLICE AGENCY]

Manguk Jeondo is presumably the oldest existing map of the world in Korea. It was painted in 1661 by Bak Yeon-seol during the second year of the reign of King Hyeonjong of the Joseon Dynasty (1392-1910). The map is designated as the country’s Treasure No. 1008, along with other books of the Jeongnanggong Branch of the Hamyang Bak Clan.

Despite the age, the map was painted in a very western, contemporary style, featuring all five major oceans and six continents in the same arrangement as world maps today. According to Kim Sung-hee, an official from the cultural heritage appraisal team at the Cultural Heritage Administration, the seas and continents are each painted in different colors and even the waves in the seas have been expressed.

“This map is highly recognized because we can use it to understand how Joseon scholars saw the world,” said Kim.

However, the map was stolen in 1994 from Hamyang Bak Clan’s home in Dongdaemun District, central Seoul, where it had been preserved. For the next two decades, there was no trace of the map until late last year, when rumors spread that someone was selling the Manguk Jeondo at an antique market. The Cultural Heritage Administration opened up an investigation along with the police.

The map, which measures 133 centimeters (52.3 inches) by 71.5 centimeters in size, was hidden behind a wall of a 50-year-old man’s house in Andong, North Gyeongsang. According to the police, the man, identified as A, had been making attempts to sell the map in November.

After obtaining a search and seizure warrant, they combed through A’s home in search of the item. The police said they sat with A and eventually got him to confess the whereabouts of the map.

Behind wallpaper, the Manguk Jeondo was folded twice and covered in mold, according to the Cultural Heritage Administration. The corners of the map were also worn down, it said. The administration spent two weeks repairing the document.

Left: Lee Jong-bin, a descendant of Prince Yangnyeong, talk about the value of “Sungnyemun” woodblocks in Prince Yangnyeong’s handwriting - stolen in 2009 - on May 28 at the Seoul Metropolitan Police Agency in central Seoul. Right: Police rip the wallpaper off the wall of a man, identified as A, to collect the Manguk Jeondo. [JOONGANG ILBO]

Although A insists he did not know that the map is a state designated treasure, the police presume that he was fully aware of the fact due to the fact that he waited more than a decade to sell the map. The statue of limitations for cultural property theft expires after 10 years. Other valuables belonging to the Hamyang Bak Clan were also found in A’s truck and his store, said the police.

Police think that A attempted to sell the map through an auction dealer only recently because he was having financial difficulties.

Meanwhile, the police and the Cultural Heritage Administration team managed to seize other stolen cultural assets, including six woodblocks featuring Prince Yangnyeong’s handwriting. Two blocks for “Sung” and “nye,” that make up Sungnyemun Gate and four for “hu,” “jeok,” “byeok” and “bu,” which form the title of a literary work in Chinese characters. They were stolen in September 2009 from Monghangak, a traditional Korean building in Damyang County in South Jeolla, where Yi Seo, the great grandson of Prince Yangnyeong, used to reside. Prince Yangnyeong was the first-born son of King Taejong of the Joseon Dynasty. The woodblock was concealed for many years inside a vinyl greenhouse belonging to a 70-year-old man, identified as B, in Yangpyeong County, Gyeonggi. The cultural asset had also been concealed for more than a decade. After the statute of limitations had expired, B also tried to sell it to an auction dealer. The woodblocks, according to the Cultural Heritage Administration, are in fairly good condition.

Although the wooden blocks are not state-designated treasures, the administration said they are also highly valuable historical cultural assets. The “Sungnyemun” woodblocks, for example, are the only direct source the country has to restore the signboard of the Sungnyemun Gate, which is National Treasure No. 1. In fact, a rubbing of the woodblock was used to restore the signboard when the gate was destroyed in a fire in early 2008.

Even if a statue of limitations for stealing a cultural asset has expired, police say that they still can punish criminals for concealing the goods because it is a breach of the Cultural Properties Protection Law.

Such assertions - that they purchased it from a person they don’t know or a person who is deceased - according to the police, are typical testimonies.

However, the Cultural Heritage Administration said it announces stolen cultural properties online, insisting that it is difficult for those interested in buying or selling the items to miss the information.