Kim Yo-jong shows up at games

Kim Yo-jong shows up at games 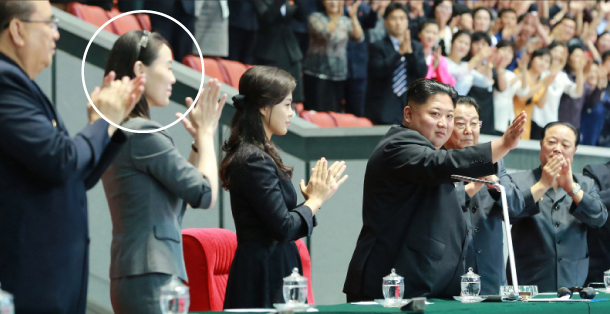 North Korean leader Kim Jong-un’s younger sister, Kim Yo-jong, marked with a circle, attends a mass gymnastic performance in Pyongyang on Monday as part of her brother’s entourage. She resumed public activity after her last appearance at the Supreme People’s Assembly meeting in April. [YONHAP]

Kim Yo-jong, the first vice director of the Propaganda and Agitation Department of the North Korean Workers’ Party, attended the country’s iconic gymnastics performance at a stadium in Pyongyang on Monday along with the North Korean leader and other top officials, according to the Korean Central News Agency on Tuesday. She sat next to her sister-in-law, Ri Sol-ju, to watch the mass propaganda performance “The Land of the People.”

The report on Kim Yo-jong was made amid speculation that she was “laying low” after the failed summit between her brother and U.S. President Donald Trump in Hanoi, Vietnam, in February. The Chosun Ilbo, a conservative South Korean newspaper, reported last week that top officials who prepared the summit were executed or purged, and the leader’s younger sister was being disciplined.

Kim Yo-jong made no public appearance since she attended the Supreme People’s Assembly meeting in April, fueling the speculation.

The report quoted an anonymous source inside North Korea, but the South’s Unification Ministry and National Intelligence Service, as well as the Blue House, have refused to confirm any information.

Starting this week, Pyongyang’s state media released reports one after another to disprove the Chosun Ilbo report. Although it said Kim Yong-chol, who had served as the counterpart of U.S. Secretary of State Mike Pompeo, was purged and sent to a labor camp, the North’s media reported Monday that he accompanied North Korean leader Kim to an art performance on Sunday.

Kim Yong-chol appeared as part of the North Korean leader’s entourage to the mass games on Monday, indicating that he is still a member of the inner circle of Pyongyang.

The seating arrangement of the entourage at the gymnastics performance was also unusual, as Kim Yo-jong sat next to Ri, the first lady of the North. Although she is the younger sister of the North Korean leader, it is the first time that she sat next to Ri at an official event.

A photo released by the North Korean media showed that Kim Yo-jong sat closer to the North Korean leader than other top North Korean officials such as Ri Su-yong, vice chairman of the Workers’ Party, despite her lower rank in the party, fueling speculation that her political profile was actually elevated.

Yet the South Korean government refused to interpret the ranking of the North Korean elites. “I don’t think it is appropriate for the government to comment on the meaning [of Kim Yo-jong’s public activity],” a Unification Ministry official said. “We are always carefully paying attention to the information of key North Korean officials.”

“We do track the order of the officials being listed in North Korean media and seating arrangements at events,” he said. “But the order is a bit different from actual rank. Even if she sat in a good seat, it is inappropriate to evaluate it [as a sign of an improved power], because the arrangements do not always follow the same rules.”

The official also declined to interpret the resumption of Kim Yong-chol’s public activities, in contrary to rumors that he was purged.

“We just have to pay attention that he resurfaced,” he said.

The official also refused to give any information on whether Kim Hyok-chol, who the Chosun Ilbo said had been executed by firing squad, is alive. A North Korea expert in Seoul said Kim was spotted on April 13 in the North, questioning the veracity of the Chosun Ilbo’s report that he was executed.

While the Unification Ministry refused to discuss his fate, CNN reported Tuesday that he was alive and in state custody after being investigated for the failure of the Hanoi summit. The report quoted “several sources familiar with the situation”.