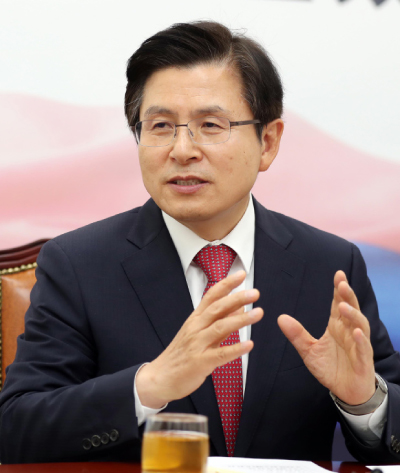 “The reason why the people are hesitating to support our party is because we are not providing clear alternative policies,” said Hwang Kyo-ahn, chairman of the LKP, at a meeting held at the National Assembly to launch the committee. “The committee will work on drafting clear and specific alternative policies that will improve the people’s livelihoods both in the short term and long term.”

The committee, named the Special Committee for the Paradigm Shift of the Economy 2020, consists of some 70 members, including 28 lawmakers and 30 professors. It will be co-chaired by LKP Reps. Kim Gwang-lim, Jeong Yong-ki and Kim Se-yeon, who also heads the party’s research center, the Yeouido Institute. The next general elections are in 2020.

“The economy is the card that we will have to play [in the coming general election],” an LKP lawmaker told the JoongAng Ilbo on the condition of anonymity. “For a simple reason: the current government’s economic policies have not worked.”

“We hope that through the committee’s work, people will call us the party that has it together when it comes to economic policies,” said Rep. Na Kyung-won, floor leader of the LKP, at the meeting.

The committee was announced when Hwang was elected chairman of the LKP in February.

“We will immediately begin a project to transform the economy by 2020,” Hwang said at the first supreme council meeting of the party since being elected on March 4. “The project will go against the income-led growth policies and leftist populism policies of the current administration.”

It said it will provide the details before the National Assembly’s regular session in September.

“It’s taken decades for the country to grow its economy but just two to three years for all of that to collapse,” said Oh Jeong-geun, professor of financial information technology at Konkuk University, who is also a member of the new LKP committee. “Anachronistic leftist policies cannot save the economy. We will draft economic policies that will provide alternative options and solutions.”

The Bank of Korea said last week that the local economy contracted 0.3 percent in the first quarter of the year from three months earlier, the worst performance in over a decade. In a recent survey by Gallup Korea, 44 percent of 459 respondents said they thought negatively about Moon, half of whom said it was because they disliked his attitude toward the economy.

Hwang sternly criticized the Moon administration’s policies in a recent interview with the JoongAng Ilbo.

“The reason why I am criticizing the Moon Jae-in government is because the policies drafted under his leadership have been ruining the livelihood of the people and threatening the security of the country,” Hwang told the JoongAng Ilbo on Monday. “It is one thing to implement erroneous policies and another to refuse to acknowledge these errors and fix them. The current government says that it is working for the people, but it’s just lip service. At this rate, the small business owners and self-employed in the country will face an even more difficult situation by the end of the year.

“But I know that criticizing the administration without providing alternatives is meaningless, especially when it comes to economic policies,” Hwang said. “That is why we launched the committee.”

Moon, during a government national fiscal strategy meeting in Sejong on May 16, emphasized that the government has invested in social welfare services such as child care subsidies and raises to the basic pension more than other OECD countries during the two years of his presidency.

“I understand that the investments have not yet led to tangible improvement in livelihoods for people in general,” Moon added. “Self-employed people and those in lower-income households are struggling the most, and this hurts me.”

Yet just two days before, Moon said that his income-led growth policies are doing pretty well.

“Our government in the first year introduced our economic policy direction, and in the second year we started turning the country around to become innovative and inclusive,” he said at an event for small- and medium-sized businesses in Seoul on May 14. “And in the third year, we plan on seeing [these efforts] bear fruit so that [businesses] in the field can actually feel [the difference] … When looking at it overall, our economy is moving forward to success.”