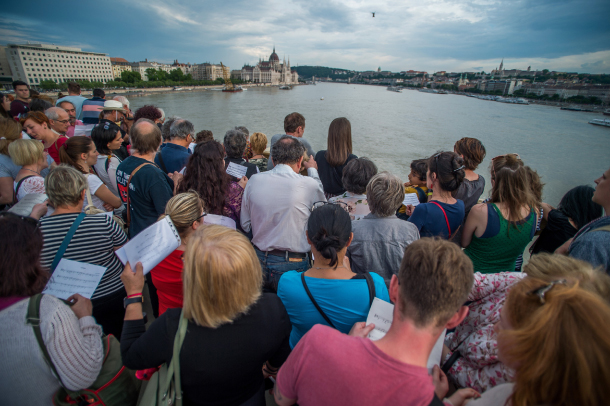 People sing the Korean folk song “Arirang” to pay tribute to the victims of the boat accident on Margaret Bridge, the scene of the accident, in Budapest on Monday. A sightseeing boat carrying 33 South Korean tourists collided with another ship and sank in the Danube River on May 29. [EPA/YONHAP]

Two bodies recovered from the Danube River were confirmed to be Koreans Tuesday, bringing the death toll in the capsized Hungarian ship tragedy to nine.

The Korean Ministry of Foreign Affairs said in a statement Tuesday that a body was recovered some 132 kilometers (82 miles) downstream from the site of the accident at 8:40 a.m. Monday morning, and Korean and Hungarian authorities confirmed it was a Korean man in his 60s.

The ministry later confirmed that a second body recovered from near the sunken ship in the Danube River around 5:40 p.m. Monday afternoon was a missing Korean woman in her 50s.

These were the first bodies recovered in the days following the fatal sinking of the Hableany, or Mermaid, on the evening of May 29 after it was hit by a larger cruise ship, the Viking Sigyn. There were 33 Koreans aboard the sightseeing boat along with two Hungarian crewmen. The remains of seven Koreans were found that night and seven people were rescued.

As of Tuesday, 17 Koreans still remain unaccounted for, along with the two missing Hungarians, including the captain. Recovery of the bodies has been difficult because of the high water level, rapid currents and poor visibility underwater.

While the initial seven dead were recovered within the vicinity of Budapest, the man in his 60s discovered Monday drifted much further downstream to the Hungarian village of Harta, according to local police.

The missing woman was discovered outside the sunken ship when Korean and Hungarian divers entered the river Monday to determine if conditions were suitable to conduct underwater searches. Hungarian authorities plan to salvage the vessel this week, lifting it out of the waters with a large crane.

The Korean and Hungarian joint rapid response team on Monday sent in expert divers to see if they could safely carry out underwater search operations.

Bodies could still be trapped inside the submerged ship, and Korean divers are hoping to find them before the boat is lifted.

Janos Hajdu, Hungary’s director general of the Counter-Terrorism Centre heading his government’s search and rescue efforts, on Monday said that Hungarian and South Korean divers will work together to locate any bodies still trapped in the sunken ship. However, Hungarian authorities are concerned about the danger of diving operations and have urged an early salvaging of the ship.

Experts think the search for the missing bodies may have to be expanded greatly taking into consideration the rapid current. Bodies may have been carried as far as the Iron Gates on the Danube between Serbia and Romania, they say.

Korean Foreign Minister Kang Kyung-wha, who made a trip to Budapest last week to oversee rescue operations, plans to meet again with Hungarian Foreign Minister Peter Szijjarto in Slovakia later this week on the sidelines of a Globsec international security forum to discuss the ship’s sinking. She is expected to ask for cooperation in the search effort.

“We are leaving open all possibilities and working to expand the search radius,” Kang Hyung-shik, a Korean Foreign Ministry official overseeing overseas management, told reporters in Seoul Tuesday. He said Korea has reached out to related authorities in neighboring countries including Croatia, Serbia, Romania, Bulgaria and Ukraine.

Nearly 50 relatives of the missing have flown to Budapest to watch the recovery efforts, but some have expressed a desire to return to Korea. Relatives of the confirmed dead are looking into repatriation procedures.

A Seoul Foreign Ministry official added that bereaved family members will receive support from related agencies, including the Ministry of Health and Welfare.

Dozens of Hungarians mourned the victims Monday evening by singing “Arirang” on the Margaret Bridge over the Danube River.