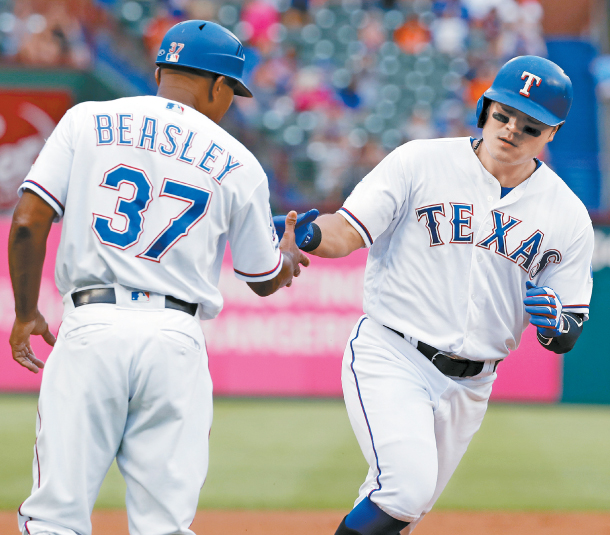 Choo Shin-soo of the Texas Rangers, right, runs the bases after hitting a leadoff home run against the Baltimore Orioles at Globe Life Park in Arlington, Texas, on Tuesday. [AP/YONHAP]

After 15 years in the majors, Choo Shin-soo of the Texas Rangers made history on Tuesday night.

During the Rangers’ game against the Baltimore Orioles at Globe Life Park in Arlington, Texas, on Tuesday, Choo became the first Asian player in the MLB to ever hit more than 200 career home runs.

Against the Orioles, Choo, who started the game as the Rangers’ leadoff and a left fielder, got off to a quick start by hitting a home run at the bottom of the first, in his first at bat, while the Rangers were losing 0-4.

This is Choo’s 11th home run of the season, slightly improving his batting average to .302 for the season.

Choo, who headed to the United States after graduating from Busan High School, made his big league debut in 2005 with the Seattle Mariners. At the time, Choo was the first fielder from Korea to make a major league debut.

Then, two days after he was traded to the Cleveland Indians in 2006, Choo hit his first home run in the majors. With 14 home runs throughout the 2008 season, Choo earned a spot in the starting lineup, and in 2009, Choo became the first Asian player in the MLB to join the 20-20 club, while maintaining his batting average at .300. A spot in the 20-20 club means a player has hit 20 home runs and stolen 20 bases within a single season.

In 2010, Choo hit his career high of 22 home runs. After playing six seasons with the Indians, Choo was traded to the Cincinnati Reds.

Yet things didn’t turn out too well. In his first season with the Rangers in 2014, Choo had one of his worst seasons in the MLB, finishing with a .242 batting average and 13 home runs in 123 games. Although he suffered from injuries over the next two seasons, Choo still met expectations by matching his career-high 22 home runs and hitting for the cycle during the 2015 season.

By hitting for the cycle during a game against the Colorado Rockies on July 21, 2015, Choo became the ninth player in the Rangers history to do so and, once again, became the first Asian player in the majors to make such accomplishment.

Hitting for the cycle is when a player manages to hit a single, a double, a triple and a home run within one game. The achievement is incredibly rare, occurring on average less than three times per season in the entire MLB.

Having finished the 2016 season early because of injuries, Choo made an impressive comeback in 2017, once again tying his career-high 22 home runs. Then, last year, Choo had his best first half of the season yet.

He first started the season by setting a home run record. Earlier, during the 2018 season, Choo surpassed Hideki Matsui’s 175 career MLB home runs to set a new record among Asian players in the big leagues with a walk-off home run against the Kansas City Royals on May 26.

Then he set another record in on-base streak. He started by exceeding Ichiro Suzuki’s 43-game on-base streak to set a new record for Asian-born players in the MLB. Three games later, Choo broke the Rangers’ all-time on-base record, setting the longest streak in the club’s history.

At 52 games on base, Choo has the longest streak of any active player in the MLB and the longest single-season streak in Rangers history. His streak ended on July 21, during a game against the Indians.

He has also done enough to place himself among some of the greatest names in baseball history. Choo’s on-base record is now tied with Hall of Famer Babe Ruth, arguably one of the best players in MLB history.

Such achievements were good enough to see him participate in the MLB’s All-star game for the first time in his career.