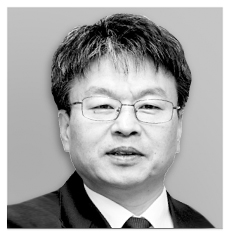 Lee Chul-ho
The author is a senior columnist at the JoongAng Ilbo.

U.S. President Donald Trump demonstrated the prowess of the United States by choosing Huawei Technologies — a household name in China — for its precision attack in his trade war with China. He went straight to the core of the Chinese value chain to destabilize its influence over the globe.

ARM cut its ties with Huawei even as the Chinese gear maker had been a customer of the British CPU designer. ARM is now under Softbank, and its owner, Masayoshi Son, has close connections with China as he is the largest shareholder in Chinese e-commerce giant Alibaba. Still, ARM immediately severed contract with Huawei because of the U.S. Export Control Reform Act that obliges even non-U.S. companies to get authorization from the U.S. government if their products are more than 25 percent made of U.S. parts or technologies. The semiconductor design technologies ARM obtained through its 2004 acquisition of Artisan Components, a U.S. company, brings the company under the U.S. regulations. That leaves Huawei, the world’s second largest smartphone maker, on its own to make its chips for smartphones.

The second blow came after Google stopped providing Android OS to Huawei. Huawei smartphones cannot run without the Android OS. Its position as the world’s No. 2 smartphone maker is in serious jeopardy as few international customers would buy a phone without YouTube and Google Maps, and running on less reliable Chinese operating systems. Huawei founder and Chairman Ren Zhengfei maintains a brave face and claims the company can do without the United States. But how long can it sustain its market dominance through patriotism on the home front is questionable? Its smaller home rivals — Xiaomi, Oppo and Vivo — are quickly replacing Huawei at home and abroad largely thanks to the Android OS they use.

The attack on Huawei has broadened the trade friction between the United States and China to a full-fledged economic war beyond tariffs and technologies. China threatens the United States with its rare earth minerals and potential sales of its holdings in U.S. Treasuries as its next card. But they are not enough to turn the tables in its favor. The United States and its ally Australia can also dig up rare earths if they put aside environmental risks. Even if China dumps U.S. government bonds, the U.S. Federal Reserve can print dollars to buy the Treasuries. Moreover, the United States has the backing of the British and the Japanese. China could risk being trapped behind a digital iron curtain.

It cannot be denied that Huawei has relied on technology theft and copies to become an IT powerhouse. Beijing also has bullied and forced unfair deals on foreign enterprises, including technology transfer, in return for their access to the world’s largest consumer market. As a result, an international consensus has been reached that the time has come for China to learn to play fairly.

The war may drearily drag on as China won’t likely back down easily. The future industrial age of artificial intelligence (AI), self-driving cars and 5G have immense potential. A new superpower could emerge after the technology Cold War. The war is costing U.S. enterprises. About 70 percent of iPhones are made in China and Qualcomm and Micron each make 67 percent and 57 percent of their revenue, respectively, in China. Still, Trump has taken the extreme measure of slapping maximum 25 percent tariffs on Chinese products and restricting U.S. supplies to the country. Both Trump and his Chinese counterpart Xi Jinping have their political lives at stake.

The problem is that Korean enterprises are caught in the crossfire. Senior executives from Huawei recently visited Korea and met with suppliers to seek their guarantee on uninterrupted deliveries of components like semiconductors, OLED and camera modules. High-rank officials from the Chinese government also met with their Korean counterparts in Seoul to warn of consequences should Korean companies cut ties with their Chinese partners. The Chinese Commerce Department already signaled it would blacklist companies for retaliatory action for any cessation in parts supplies and business contracts. Korea, which still suffers from Beijing’s punitive measures for installing the U.S.-led Terminal High Altitude Area Defense (Thaad) antimissile system, is sandwiched between the two global powers.
Diplomacy should be put into play to ease the burden on companies. Yet the government is nowhere to be seen. There is no information or strategy. National Security Office head Chung Eui-yong has lost his connection with the White House since his U.S. counterpart H.R. McMaster was replaced by hawkish National Security Adviser John Bolton.

The Seoul-Washington security channel is barely maintained by Kim Hyun-chong, deputy director of the National Security Office, and Mick Mulvaney, the acting White House chief of staff, thanks to their relationship established during the Korea-U.S. automobile negotiations. The channel to Beijing is more pitiful. President Moon Jae-in sent his closest aide, Noh Young-min — and more recently former policy chief Jang Ha-sung — as ambassador to Beijing. And yet there is no answer when Xi would be making a visit to Korea. Foreign Minister Kang Kyung-wha acts mostly as a figurehead.

The day will come when Seoul will be outright asked to show where it stands. If it maintains the United States as its security partner and China as an economic partner, it could lose both. The government also cannot stay on the sidelines forever, saying the choice should be made by companies themselves. Easing sanctions on North Korea and providing rice aid should not be an urgent matter for the Blue House and the Foreign Ministry. They must focus on ways to protect Korean companies and national interests from the trade war. If Korea has to choose one, it must do so based on precise information and cool judgment.

Otherwise, the country and its future will be in danger.