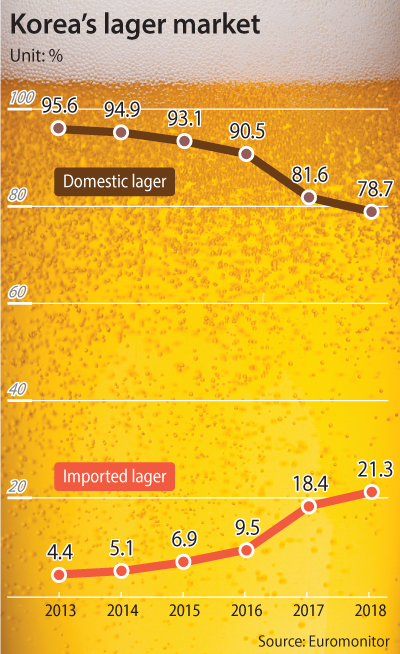 In a bid to level the beer market playing field, the government is overhauling the alcohol tax.

The tax on beer will now be based on volume and content instead of cost, the Ministry of Economy and Finance said Wednesday.

Local beer companies have argued that the existing taxation system discriminates against them as they sometimes end up paying in taxes more than cheaper foreign beers.

The current tax system has been in place for 50 years.

The difference in taxation allows for aggressive promotions on some foreign beers, such as four-cans-for-10,000 won ($8.40) specials. The market share of imported lager hit 21.3 percent last year from just 4.4 percent in 2013, according to Euromonitor.

The changes are part of a broader overhaul to the alcohol taxation system, which has been in force since 1968 and has faced criticism of being outdated.

“Considering the potential sudden changes on the current alcohol market and industry, the quantity-based system will be applied first on beer and takju [also known as makgeolli, or rice wine],” said Minister of Economy and Finance Hong Nam-ki on Wednesday, explaining the changes to lawmakers at the National Assembly.

“With the transition into a quantity-based taxation, we expect expansion of youth employment through the craft beer industry … and more jobs and increased investment through growth to local beer production.”

Through the taxation change, beer products will be levied at a flat tax rate of 830.3 won per liter ($2.66 per gallon), the average tax rate for beer over the past two years.

The changes will lead to increased tax on draft beers and beers sold in plastic and glass bottles, while decreasing the tax on canned beers.

The government added that in order to protect the craft beer industry which largely produces draft beer, it will implement a temporary two-year tax discount of 20 percent for the product.

“If the quantity-based taxes are applied, not only craft beer but expensive imported beer of higher quality will become cheaper,” said the Korea Craft Brewers Association in a statement.

The move to a quantity-based system will lead to lower taxes for expensive brands, according to the Finance Ministry.

“We agree with the government’s efforts to amend alcohol taxes, which is rooted in the issue of unfair taxation between domestic and imported beers,” said a spokesperson for Lotte Liquor, adding that the company will consider changes to pricing with the tax overhaul.

The Finance Ministry said it will submit a proposal for the amendments to the National Assembly in September for review.

The ministry also said it will extend the discount on the individual consumption tax for vehicle purchases through the end of this year to support the auto industry. The discount, implemented in July last year, was set to expire by the end of the month.