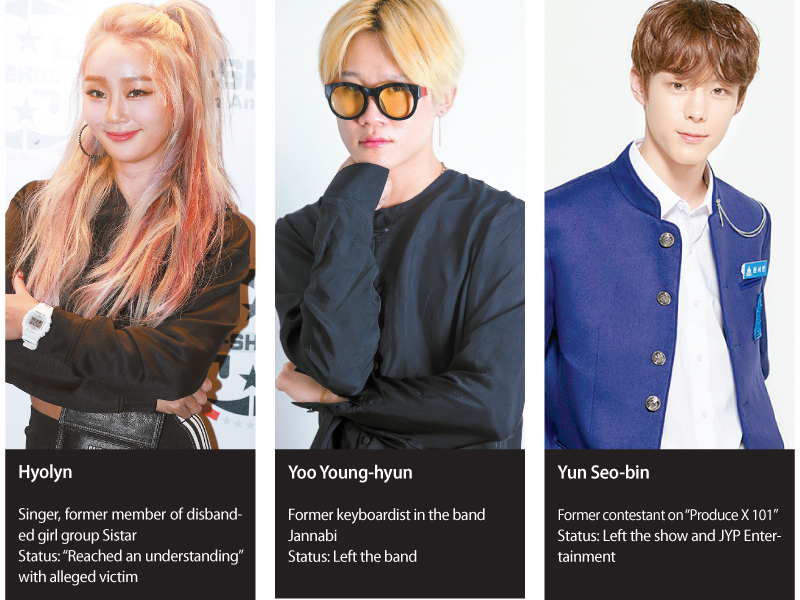 For many Korean celebrities, the axiom “what comes around, goes around” is hitting them harder than ever before.

Starting with the Me Too movement in 2018, the ugly pasts of celebrities have slowly been creeping back to haunt them as victims take to the internet to reveal what they have suffered at the hands of their famous perpetrators.

Yun Seo-bin, a former JYP Entertainment trainee and contestant on Mnet’s singing competition show “Produce X 101,” was booted from both the show and his management agency after allegations surfaced online that he had bullied students at school, drank alcohol and smoked as a teenager. The claims were bolstered by pictures of the 20-year-old smoking and drinking.

Following Yun’s widely-covered departure, many people began coming forward with accusations against other celebrities for having been bullies as teenagers. Rising band Jannabi’s former keyboardist Yoo Young-hyun was accused of harassing a victim by vandalizing their locker and putting plastic bags over their head, while Hyolyn of disbanded girl group Sistar was accused of stealing cash and clothes. Yoo has since left Jannabi after confirming the allegations himself. Hyolyn and her agency have referred to the accusations as a “misunderstanding” that they “resolved,” and even announced plans to take action against the spread of false rumors online.

School violence, the preferred term for bullying and other violence against students by the government, is undeniably a serious social problem. A series of high-profile bullying cases sent shockwaves though Korea in the past year, with one particularly tragic incident resulting in the death of a middle school student who fell off a building rooftop after bullies beat him for over an hour.

According to a Ministry of Education survey of 90,000 Korean elementary, middle and high school students in 2018, 2.4 percent of respondents said that they have experienced some form of school violence. The most common type was verbal abuse, followed by physical abuse.

Given the gravity of the problem, it’s no surprise that there is widespread support of the rooting out of celebrity bullies. Yun’s departure from “Produce X 101” was ignited by an online petition asking Mnet for his removal.

Parents of school-aged children are among those who feel most strongly about the issue. “I know because my child is a victim of school violence,” read a comment on a news article about Hyolyn’s accusations. “Forgiveness is not an option even now.”

Experts believe that it’s natural for people to be enraged by school violence. “I think it’s right that the public organically rejects [problematic] celebrities instead of deliberately forcing them out of the entertainment industry, but I can understand why the public would want [them to be removed] for issues related to violence,” said culture critic Mimyo.

The fact that celebrities are usually portrayed as benevolent figures on television contributes to the sense of betrayal and disgust that viewers feel when allegations of violence surface. In a 2015 episode of reality television series “I Live Alone,” a show about the everyday lives of celebrities, Hyolyn was presented as an avid animal lover who took care of injured cats. Last November, during a live video chat with fans on social platform V Live, Yoo and a fellow Jannabi bandmate said they were “absolutely not bad students” and that they could “say this with confidence to viewers.”

Aware of the public’s resentment toward perpetrators of school violence, management agencies and television networks have tried their best to distance themselves from alleged bullies once allegations have been made, but filtering out bad apples beforehand is no easy task.

During a press briefing in April ahead of the launch of “Produce X 101,” Mnet producers confidently announced that “we have conducted a total of three meetings with each contestant to ensure their past won’t become a controversy in the future,” only to have allegations against Yun come out a week later.

How can celebrities who face accusations of school violence - truthful or not - bounce back?

Singer-hopeful Yun isn’t giving up his musical career just yet. Just a few days ago, reports surfaced that Yun was searching for a new management agency to join. On the other hand, Yoo and Hyolyn have laid low in recent weeks.

“It’s hard to say for sure if these celebrities will be able to return to the spotlight,” said Mimyo. “In the entertainment world, moral and ethical issues are not heavily debated, and people just respond to them emotionally or try to cover up the controversy. If it’s covered well, it’s covered. If not, the accused stars will be ousted from the industry.”