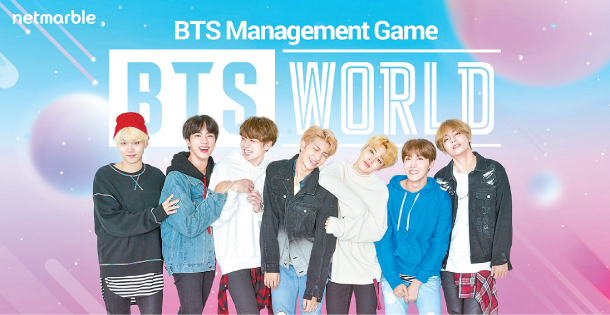 Netmarble will release “BTS World” on June 26, allowing fans to manage their very own BTS from the moment of its debut. Pre-registration for the game can be found on Netmarble’s website. [NETMARBLE]

Fans have watched them from afar, but now they will get the chance to have a hand in creating their own version of the world’s biggest boy band. Game publisher Netmarble announced on Wednesday that their highly-anticipated mobile game “BTS World” will be released on June 26 internationally (except for China), giving fans the chance to become the managers of BTS as the group continues its journey to conquer the music world.

According to Netmarble, “BTS World” is an online simulation game that allows users to make different choices in managing their very own BTS from their humble beginnings to becoming the world’s biggest K-pop stars.

Developed by TakeOne Company, the game aims to be “the perfect collaboration between K-pop and K-game,” in which the players are required to complete missions at each given stage, then are rewarded with never-before-seen videos and photographs of the beloved septet as the prize.

“Players will encounter various missions where they will select certain BTS member cards to clear the mission and progress through the game,” said Netmarble. “Collecting and upgrading these cards will open up even more stories along the way, and players will be able to interact virtually with BTS in the game through a 1:1 interactive system.”

Pre-registration is available at the game’s official website btsw.netmarble.com, where fans can preview the game by playing mini games. Original songs made for the game - sung by members Jin, Jimin and Jungkook - will be released before the game becomes available.

Meanwhile, Jin revealed his first ever solo song, titled “Tonight,” on Tuesday at midnight as a part of the “2019 BTS Festa,” a series of online events to celebrate the band’s upcoming anniversary on June 13.

The song was co-produced by Jin and band member RM.

“I wrote this song thinking about my pets,” Jin explained through a post on agency Big Hit Entertainment’s website. “It’s the first song that I’ve wrote myself, and I hope you like it. I’ll work harder and give you good songs to listen to. Thank you ARMY [BTS fan club].”

The septet remains strong on the Billboard charts, ranking No. 26 on the Billboard 200 chart with their EP “Map of the Soul: Persona,” while the EP’s lead track “Boy With Luv” currently ranks No. 81 on the Hot 100 singles chart.

“BTS remains on both the Billboard 200 and Hot 100 chart for the seventh consecutive week, the longest for a Korean artist to stay on both charts,” Big Hit Entertainment said. “This also renews the band’s record that they set by staying on both charts for six weeks with ‘Love Yourself: Tear.’”

After wrapping its concerts at London’s Wembley Stadium last weekend, the band travels to Paris to perform at Stade de France on Friday and Saturday. The band will then meet with Korean fans in Busan on June 15 and 16, followed by two shows in Seoul on June 22 and 23.