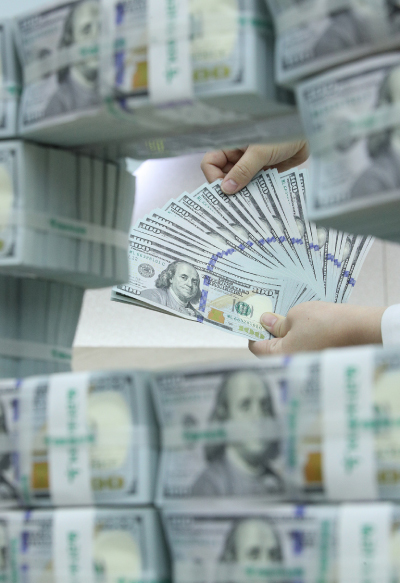 The Bank of Korea announced a drop in foreign reserves on Wednesday. The country’s foreign exchange reserves stood at ＄401.97 billion in May, down ＄2.06 billion from the previous month. [YONHAP]

Korea’s current account went into the red for the first time in seven years as dwindling exports and seasonal factors ended 83 straight months of surpluses, which was a record.

The Bank of Korea (BOK) said on Wednesday that the country registered a current account deficit of $660 million in April, a sharp reversal of March’s $4.82 billion surplus.

The last time the country posted a deficit in the current account - one of the widest gauges of international trade - was April 2012 at the peak of the European financial crisis.

“We need to focus more on a long-term trend rather than a temporary fluctuation since seasonal issues such as year-end dividend payouts took place in April,” said Park Yang-su, director general of the economic statistics department at the BOK.

Park went on to note that without the seasonal factor, a deficit would have been avoided, adding that the BOK expects a surplus in May. 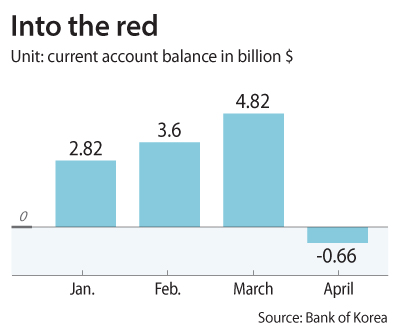 The BOK said the dividend income account posted a deficit of $4.99 billion in April, a decrease of 22 percent over a year ago.

But market analysts remain doubtful about surpluses in the near future since the trade surplus has been on a steady decline due to weak exports and rising imports.

The trade surplus fell to $5.67 billion in April from $8.47 billion a month earlier due to a drop in exports amid slowing demand for semiconductors and petrochemical goods.

The accumulated current account surplus between January and March amounted to $11.25 billion, according to the central bank. This was, again, the smallest such figure since $10.94 billion in the second quarter of 2012.

Meanwhile, the Bank of Korea announced a drop in foreign reserves the same day.

The country’s foreign exchange reserves stood at $401.97 billion in May, down $2.06 billion from a month earlier.

The monthly drop was the largest since November 2016 and was the second monthly decline in a row.

Still, the central bank said that the reserves were the world’s ninth-largest. China has the largest amount of foreign reserves, followed by Japan and Switzerland.