Illustrator draws up a new career for himself: While visiting Korea, Mike Dutton hosted a workshop for children

Illustrator draws up a new career for himself: While visiting Korea, Mike Dutton hosted a workshop for children 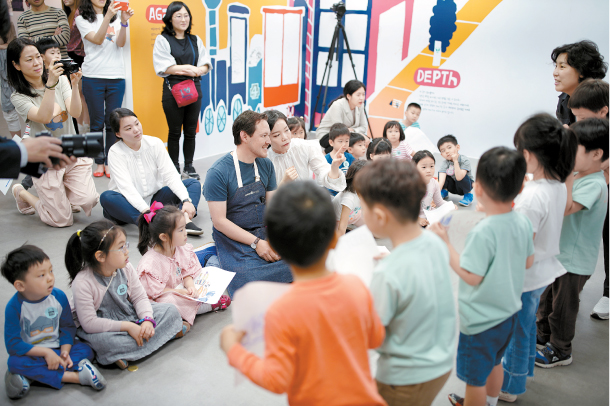 Illustrator Mike Dutton has gone from one dream job to another - starting off as a Doodler at Google, he then worked as an illustrator for YouTube, and has most recently transitioned to a job as a production designer at Tonko House Animation Studios, which was founded by two former Pixar employees, Robert Kondo and Dice Tsutsumi. The Tonko House animation film “The Dam Keeper” (2014), was nominated for Best Animated Short Film at the 2015 Academy Awards.

When Tonko House opened the first Korean exhibition of their works in Gangnam District, southern Seoul, Dutton personally flew in from California to conduct an art workshop program for kids over three days - because if there’s one thing that Dutton loves more than art itself, it’s when art is combined with children.

He says working with kids inspires him to pursue the art that he so dearly loves.

The Korea JoongAng Daily met with the illustrator to learn about the artist’s exploration into different fields of illustration and how he managed to arrive to the job that he feels “is it.” The following are edited excerpts from the interview.

Q.Your previous jobs both seem like positions that any illustrator would love to have. Can you tell us why you decided to move on to another job?

A. I’d been a Google Doodler for five years and honestly, it’s an amazing job, but I was at that point where I felt like I’ve done everything I could with six letters and I was ready for a new challenge. So at the time there was a new art department forming at YouTube and they invited me to be one of the illustrators that would oversee how illustrations would fit at YouTube.

As for YouTube, I wasn’t actually looking for another job. I was actually quite happy there, and I finally felt like I was at a place where I found a voice. But there was a part of me that wanted to further develop my stories. The short illustrations I created for YouTube Kids were great, but they didn’t last for more than three to five seconds, so there was no time for actual stories to take place.

Dice and I go back a long way, and when he offered this opportunity to work as an art director for an animated kids TV show, I thought that was truly great. I’ve never worked in animation before but I thought if I were ever to switch industries I would have to start from the bottom. Instead, Dice trusted me to take on the job of art director, so that sort of faith he put in me was actually a big part of what gave me the courage to say yes.

What are you currently working on at Tonko House?

It’s about cars but they don’t look like Pixar cars (laughs). When Dice told me about the plot, I immediately saw how charming the story was and what the core message was behind the story. It’s more about family value stories and they happen to be cars. They’re very cute and appealing cars, but it’s really about just being a good person - learning to be very patient with your little sister, being a good friend and a buddy at school.

My role as an art director last year was to give the Tonko House touch to the story. In other words, how do we make it feel like a real family show instead of just being about these cool, flashy cars? We want to give that human element to the animation, to be warm and inviting and also be a world you might want to be in.

I think that’s kind of consistent in all of the Tonko House worlds. To provide entertainment, raise awareness and inspire curiosity. So we tried to bring all of these things to the project. This year, I’m working on the second season of the same show, but I’m working as a production designer now.

Can you tell us about the art workshop program you’ve been invited to play a part of?

The idea of the art education program in Tonko House is that although we inspire kids, they also inspire us. We’re empowering creativity but also saying, “Hey grown-ups, listen to your kids. You see them going forward and putting themselves out there creatively. Follow their example.”

The workshop here is basically the same. It’s not exactly a class, but having conversations and basically communicating about stretching a child’s imagination as far as possible.

So my job here was to get the conversation going. I might ask the kids, “What’s your favorite animal?” and one of them yells “Penguins!” OK, so I draw a penguin, and I ask another question, “What do you want to be when you grow up?” and one of them answers “Firefighter!” So I draw a firefighter hat for the penguin and a truck, and I continue to ask questions so [that the] kids can be stimulated to start their own drawings.

We also designed the walls based on the idea of textbook margin. If you just have a big, open blank piece of paper, it’s hard to think about what you want to draw. But all sorts of creativity pops up on textbook margins, right? So we also tried to create enough margins for kids to fill in, so that they won’t be too daunted by the prospect of filling in [the whole] wall.