From left, enNature Zero Meat nuggets from Lotte Foods, Beyond Meat’s burger patties and a burger made with the patties. [LOTTE FOODS, DONGWON F&B]

With the market for meatless meat fast growing globally, domestic food brands are taking an interest.

The stock price of Los Angeles-based Beyond Meat has risen nearly 300 percent since its initial public offering in May, while Redwood City, California-based Impossible Foods has raised more than $750 million in funding from investors like Bill Gates and Google Ventures.

Beyond Meat and Impossible Foods are reportedly served in 20,000 restaurants in the United States, including Red Robin, a casual dining chain, and Del Taco, a fast food chain serving Mexican food.

Vevey, Switzerland-based Nestle said its Sweet Earth brand will launch the vegetarian Awesome Burger in the United States in the fall.

Following the global food trend, Korean firms have jumped into the market, which many believe will become lucrative in the coming years. 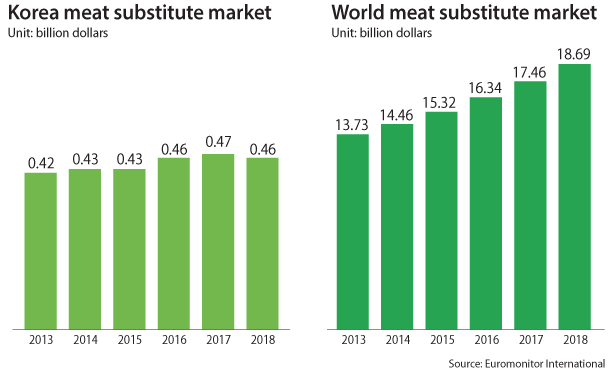 Lotte Foods in April introduced veggie nuggets and cutlets under its enNature Zero Meat plant-based meat alternative brand name. The products, made with wheat protein and yeast extract, are the result of two years of development.

Lotte says it plans to diversify the enNature Zero Meat line to steaks, ham and sausages in the future, with the goal of reaching 5 billion won ($4.2 million) in sales this year. The company said the performance of enNature food is hard to determine for now since it has been mainly sold at small supermarkets. Starting in mid-May, the products have been available at Homeplus and online.

“The alternative meat market in Korea hasn’t been properly formed,” said a spokesperson for Lotte. “We have just taken our first step, and sales are not great as of now. But we entered the market preemptively with the belief that the pie will get bigger.”

The size of the meat substitute market in Korea last year was $462.6 million from $415.3 million in 2013, according to Euromonitor International.

Dongwon F&B is cooperating since February with Beyond Meat to sell the products in Korea. Around 10,000 patties have been sold, according to a spokesperson for the company.

Dongwon believes the meat alternative market in Korea is too small to expect profit out of the business for now, but it sees great potential.

“We entered the meat alternative business to make an early entry into the market hoping to enjoy the first mover advantage,” said a spokesperson for Dongwon. “With people’s growing concerns for eco-friendly and healthier consumption, we believe the meat alternative market will be properly developed in Korea in several years.”

CJ CheilJedang and Pulmuone have yet to offer meat-alternative products, but both are engaged in meatless meat research and development.

CJ believes a proper meat alternative market will be firmly established around 2021, and it is preparing to bring out the products as part of the effort to diversify its home meal replacement products.

Pulmuone, known for organic plant-based food protein, is also developing meat alternatives, but it hasn’t reached the stage of commercialization, according to a spokesperson at the company.

“Price is the most important factor that drives the growth of the meat substitute market,” said Sunny Moon, senior research analyst of food and nutrition at Euromonitor International Korea. “Meat alternative products are priced relatively higher than animal-based meat. A frozen animal-based patty, for instance, is 5,000 won per kilogram ($1.9 per pound), while the equivalent amount of an alternative meat product costs 50,000 won. Since the number of people who are forced to eat alternative meat for health reasons are significantly lower in Korea, it won’t be easy to enlarge the market unless companies bring out products with competitive prices.”

Despite the challenges, great potential is seen. “To produce meat alternatives, various artificial chemicals and ingredients must be used, resulting in the growth of a whole new industry,” said Mina Kim, professor of food marketing and safety at Konkuk University.

Apart from plant-based meat, cultured meat is seen as another replacement.

Cultured meat is lab-grown meat that is produced using tissue engineering techniques. The luxury meat, which could cost a couple of thousand dollars for 100 grams (3.5 ounces), does not require the raising of a large number of animals or the slaughter of the animals.

Fewer heads of livestock reduces carbon dioxide emissions and could help create a sustainable food system, according to supporters of alternative meat technologies.

The research on cultured meat is still ongoing, and it could take a few decades before the product is economically sensible and commercially available.