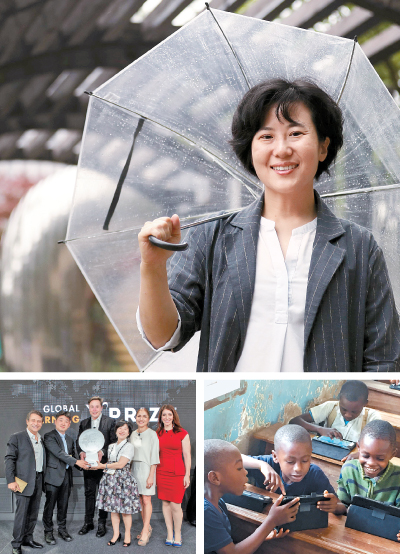 Clockwise from top: Lee Soo-inn, CEO of Enuma; students at an elementary school in Tanzania study with Enuma’s Kitkit School; Lee, third from right, holds up a trophy after Enuma received ＄5 million in the XPrize competition. [CHOI SEUNG-SIK, ENUMA]

Addicted to electronic games? How about getting hooked on learning?

Since the World Health Organization (WHO) declared game addiction a mental disorder at the end of last month, some game makers have been scrambling to limit the damage. Other companies are seeing the bright side of the designation as the main risk of overusing their product is learning more.

Enuma is a start-up that seeks to realize educational value based on technology. Located in Berkeley, California, more than 30 percent of the company’s employees are alumni of large Korean game companies like NCSoft and Nexon.

Todo Math is a mathematics studying app made by the start-up using gaming principles. Since its release in 2014, cumulative downloads total seven million.

The response has been positive, mainly from moms, and the company has raised a total of $9 million.

The JoongAng Ilbo met founder Lee Soo-inn on May 27, the day the WHO classified gaming addiction as a disease. She said that after visiting Korea for about a week, she will be returning to Berkeley.

“Games can move people and even benefit them, but without making use of these good points, and having to watch games become socially controversial, I feel heavy” said Lee.

“A well-made game creates fun and concentration in a very short period of time. Foreign countries utilize one of the strengths of games, which is a user-centric design, and apply the features into fields like learning, medical science and the public sector. For instance, games used to make an obese patient get back on their feet, and a depressed person to feel better. Our app is the same: If a game allows children to bear the boredom of practice and lets them learn as much as possible by introducing the fun elements of games, it is contributing to the society at another level.”

The screen of the Enuma’s education app has the look and feel of games like Anipang and Angry Birds.

Lee and her husband, Lee Gun-ho, lead the company together, her as CEO and him as chief engineer. They both came from NCSoft. Her husband, who majored in computer engineering at Seoul National University, developed games and worked as a server team leader for Lineage 2. She went to the same school, majoring in sculpture, and used to design games. In 2008, the husband decided to study at University of California, Berkeley.

They had a child in the United States and decided to found an education-related start-up.

The couple started to develop a program that helps children with learning disabilities to focus and study. The app started to take off in 2012 after they met Manu Kumar, founder of K9 Ventures, a venture capital (VC) based in Palo Alto, California. He invested around $300,000.

The first office was established on the first floor of the house they lived in near UC Berkeley. After two years, they released Todo Math and received funding from a number of VCs, such as SoftBank Ventures Korea and YellowDog.

The company was a finalist in the Global Learning XPrize and received $5 million. XPrize is a non-profit that holds competitions to promote technology that helps humanity. It has been running since 1995 and is based on the Orteig Prize, which was won by Charles Lindbergh for making the first solo non-stop transatlantic flight.

“Games that are easy to do are trending these days. We reflected the trend of the age in Kitkit School. As user-oriented as possible, we made the game to make the users play the game for a long time by giving rewards and ultimately allowing them to study until the game ends,” said Lee.

Almost 200 start-ups entered the competition. In the final round, the app developed by each start-up was loaded on 2,700 tablet PCs and distributed in 170 villages in Tanzania. After 15 months, the app that resulted in the best educational progress was the winner. Enuma took first place along with onebillion, a London-based non-profit.

“The children who received the tablet PC had to go to the charging station, which was half an hour from their village, every day to charge the battery. Although they were exhausted, the children studied Swahili on their own for more than 12 hours every week.

“At first, 93 percent of children were unable to read a single word, but after 15 months, more than half of the children could read and write a great amount of words. This was something unexplainable without the great power that game possesses.”

“Our goal is creating a society where everyone in the world can read, write and calculate at an elementary second level,” said Lee.