Moon takes shot at partisans of all kinds

Moon takes shot at partisans of all kinds 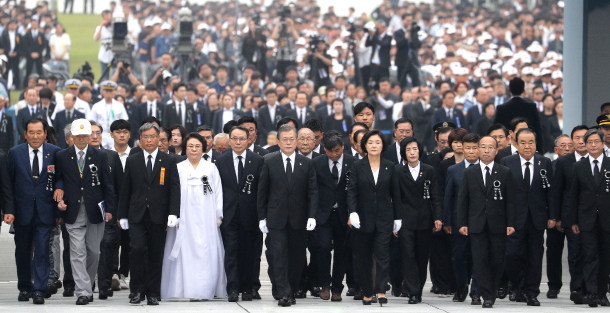 President Moon Jae-in highlighted the need to build “an integrated society” on Thursday during a national address commemorating Memorial Day, saying that the act of “clinging to vested rights or private gain” goes against both conservative and liberal causes.

Moon did not single out any individual or political party in his speech, but the remarks came at a sensitive time for the National Assembly, as the main opposition Liberty Korea Party (LKP) has been boycotting parliamentary activities since Moon’s ruling Democratic Party (DP) formed an alliance with three other minor opposition parties to fast-track bills on political and judicial reform in late April.

The LKP has since been demanding the DP revoke the bills.

“When it comes to patriotism,” said Moon, “there is no difference between conservatives and liberals. Love of country is a mindset that regards the destiny of a national community as one’s own, as opposed to clinging to vested rights or private gain.

“Those engrossed in vested interests are not being true to either conservative or liberal causes.”

Moon said he respects “all acts of patriotism” regardless of whether they were by conservatives of liberals, saying that everyone “by nature” can at times be conservative and at other times liberal.

“As long as we avoid extremes and define patriotism within the realm of common knowledge, no matter how we view ourselves - conservative or liberal - we can move closer to an integrated society.”

A high-level official from the Blue House said Moon had in mind both conservative and liberal forces within Korea when he criticized some people for “abusing political ideology.”

The Blue House source said that Moon’s original speech did not include the part, “I respect all acts of patriotism regardless of whether they are from conservative or liberal quarters,” and that Moon slipped it in to stress that sincere social integration can only be reached after Korea’s left and right end their ideological conflicts.

Moon’s speech was made at the Seoul National Cemetery in Dongjak District, southern Seoul, in front of a crowd of some 10,000 people, including veterans, families of fallen heroes, politicians, government officials, students and members of the general public. Also present was the LKP’s chairman, Hwang Kyo-ahn, who toured around the nation for about three weeks last month to hold anti-Moon rallies.

First lady Kim Jung-sook, who was criticized by Moon's detractors last month for "ignoring" Hwang’s handshake during a ceremony commemorating the May 18 Gwangju Democratization Movement, was seen Thursday shaking hands with him.

During his 12-minute speech, Moon also took time to stress the U.S.-Korea alliance, saying that the United States “endured the greatest sacrifice for the sake of our country’s liberty and peace” during the 1950-53 Korean War.

“Under the flag of the United Nations, some 1.95 million soldiers from 22 countries took part in the war, and approximately 40,000 lost their precious lives,” he said. “About 33,000 U.S. warriors lost their lives and 92,000 of their soldiers were injured.”

To honor the noble sacrifices of each and every fallen U.S. Korean War veteran and to make sure the “sublime value” of the alliance between the two countries becomes “deeply etched on the hearts of both peoples,” Moon said the Korean government will build a “memorial wall of remembrance” within the Korean War Veterans Memorial in Washington by 2022.

The closest Moon got to mentioning North Korea was saying that the government began eliminating land mines in the demilitarized zone after the inter-Korean military agreement was signed last Sept. 19.