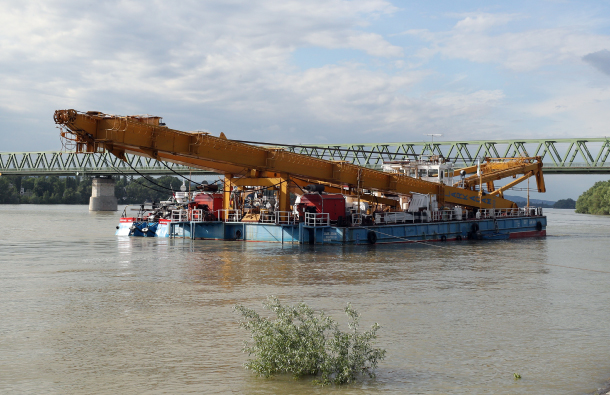 A large crane that will be used to salvage the wreckage of the Hableany is docked around 5.5 kilometers (3.4 miles) from where the sightseeing ship sank on May 29 on the Danube River in Budapest on Wednesday. [YONHAP]

Prosecutor General Moon Moo-il asked the chief prosecutor of Hungary to conduct a thorough investigation into the boat tragedy on the Danube River that killed at least 15 Koreans, the JoongAng Ilbo reported exclusively Thursday.

“Moon, in a letter to Peter Polt on Tuesday, requested thorough investigations into the tragedy and stern punishment of the culprits for their crimes,” an official of the Supreme Prosecutors’ Office told the JoongAng Ilbo. “The letter by Moon was a response to a letter from Polt, in which Polt expressed his deep condolences for the Korean victims. In his letter, Moon was thanking Polt and emphasizing how important the case and the probe are for the Korean people.”

The tourist boat Hableany, or Mermaid, was carrying 33 Koreans and two Hungarian crew members on the Danube on the evening of May 29 when it was hit by a larger cruise ship, the Viking Sigyn. The Hableany sank within seven seconds of the collision, according to Hungarian police. Only seven Koreans were rescued.

The boat disaster resulted in at least 15 deaths and 11 Koreans still missing as of press time Thursday. The two Hungarian crew members are also still missing.

The captain of the Viking Sigyn, a 64-year-old Ukrainian named Yuri C., was arrested Thursday. He has claimed he is innocent and requested to be released on bail.

“The captain has not committed any crime, he kept to all the rules,” the captain’s lawyer Gabor Elo told the JoongAng Ilbo in an email on Wednesday. Elo added that the captain has a “perfect record” over his 40-year career of operating vessels.

Korea sent rescue teams to Budapest to join the search and rescue operation, with the first ones arriving in Budapest last Friday.

On Wednesday, three additional bodies of Koreans were found.

The joint Korean and Hungarian rescue team said they recovered the body of a man in his 60s at the hull of the sunken boat at around 9:21 a.m. and the body of a woman in her 30s at around 12:10 p.m. Wednesday at a point about 31 miles south of the point of the boat collision in the part of the Danube that passes through Ercsi, a town in central Hungary.

At around 3:40 p.m. the same day, the team recovered the body of a woman in her 40s from the river, close to the point of collision.

This brought the recorded death toll of the boat tragedy in central Budapest at 15 Koreans, with 11 Koreans still unaccounted for, as of press time Thursday. The bodies of the 14 Koreans have been brought to Semmelweis University Hospital. The hospital director, in a letter to the Korean Embassy in Hungary, said that the hospital would like to provide its morgue for the bodies of the victims at no charge.

The Hungarian authorities have brought a large crane vessel to the Danube to lift the Hableany from the riverbed, but were reportedly waiting on Wednesday for the water level of the Danube to recede for the vessel to be able to pass under the Margaret Bridge to reach the point where the Hableany is believed to be.

Korean Foreign Minister Kang Kyung-wha, who traveled to Budapest last Friday and met with Hungarian Foreign Minister Peter Szijjarto and relatives of the victims before returning to Korea last Sunday, will meet with Szijjarto once more on Friday as she travels to Slovakia for a foreign ministers’ meeting of Korea and the four member countries of the Visegrad Group - the Czech Republic, Hungary, Poland and Slovakia.

Kang will also be visiting Serbia from Friday to Saturday and meeting with Ivica Dacic, the Serbian foreign minister, to request cooperation on the search for those missing in the Danube. Given the fast current of the Danube, bodies may have been carried as far as the Iron Gates gorge on the Danube between Serbia and Romania.

Kang, speaking to reporters at Incheon International Airport on Thursday, stressed the importance of identifying “those responsible” for the sinking through a probe.