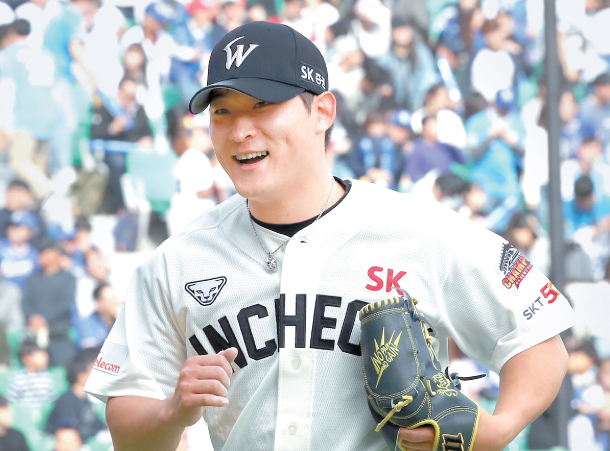 Ha Jae-hoon of the SK Wyverns walks off the mound after tossing a scoreless inning during a game against the Hanwha Eagles at Munhak Baseball Stadium in Incheon on May 31. [ILGAN SPORTS]

When Ha Jae-hoon of the SK Wyverns first started baseball, he planned on retiring at 30. But now, at age 28, Ha is having the best season of his professional career as a KBO rookie ? albeit an older one.

He’s also learning to become a pitcher after spending his whole career as an outfielder.

After graduating high school, Ha was among many major league hopefuls. To realize his dream of playing in the big leagues, Ha left for the United States and signed with the Chicago Cubs. With just a $100,000 signing bonus, Ha joined the Cubs franchise rather than the KBO.

Starting at the bottom of the Cubs’ minor league organization, Ha slowly made his way up. In 2012, he competed in the All-Star Futures Game, and in 2013, Ha was promoted to the Triple A team, the highest division of the minor leagues. He showed great batting skill, speed and, most importantly, strong throws from center field.

Despite reaching the Cubs’ Triple A affiliate, Ha began to struggle at the end of the 2013 season and underwent wrist surgery. After the surgery, Ha tried to make a comeback in 2014 but never made it to the major league team. Ha was eventually released by the club at the end of the 2015 season.

As the KBO requires major league returnees who have never played in the KBO to wait two years before joining the league, Ha continued his career by playing for an independent league team in Japan in 2016.

As Ha recorded a batting average above .600 in Japan, he was given an offer by the Tokyo Yakult Swallows of the Nippon Professional League. During the KBO’s two-year probation period, a player is not allowed to sign with another professional team in the United States or in Japan. If a player does sign with a professional league team, he needs to start his two-year waiting period all over again.

Despite the strict rule, Ha signed with the Swallows. The result was another failure for him, as Ha had a .225 batting average in 17 games.

Due to this, Ha finally decided to wait for two years and return to the KBO. Over the two years, Ha played for an independent team in Japan, and patiently waited to return to Korea. For Ha, this season has been a turning point in his career. Not only is he finally starting his professional career in the KBO, Ha is switching positions to pitcher.

Ha had received pitching training, but never thought of becoming a pitcher. Due to this, during the KBO minor league returnee tryouts in August, last year, Ha didn’t register himself as a pitcher.

“I like pitching but I wanted to be a batter,” Ha said. “Since I’ve been batting all throughout my baseball career, it wasn’t too easy to give up the bat.”

Although the 2019 season hasn’t reached its halfway point, the Wyverns seem to have made the right decision with Ha’s position change. Tossing a fastball at a speed of 150 kilometers (93 miles) per hour, Ha has become the Wyverns’ closer this season. As of Thursday’s game, Ha has picked up four wins, one loss, 14 saves and three holds with a 1.20 ERA in 31 games.

“I originally planned on using him as our closer in the second half of the season,” said Wyverns manager Yeom Kyung-yup. “I didn’t expect him to make his way up this quickly.”

Ha, too, agreed that switching positions has turned out to be the right decision.

“Looking at the result, becoming a pitcher worked out well,” Ha said. “For batters, if I can’t hit, the batter after me can make a hit. But for pitchers, they have to take the full responsibility once they get on the mound. And that’s actually exciting for me.”

For this season, Ha’s goal is to play the entire season without an injury. Throughout Ha’s international career, he’s had injuries every year. From ankle, knee, back and wrist injuries to even headaches, there wasn’t a single season where he played full time without getting injured.

“I can’t be a starter, so I have to continue to be the closer,” Ha said. “If that’s the case, I want to finish first in saves, whether that’s this year or next year.”

Looking long term, Ha hopes to become a free agent in the KBO. To do so, he has to play consistently for the next nine seasons. That might not sound like a long time if he was in his early 20s, but for Ha, nine seasons is very far away, and he will be in his late 30s.

“If I become a FA player and sign a four-year contract, I have to play baseball until I’m 43 [Korean age],” Ha said. “That seems very far away. Originally, I thought I would retire at 30 because at that age, I thought I wouldn’t be strong enough, physically, to be a professional baseball player. But I’m exactly at 30 [Korean age]. Now that I’ve actually reached that age, I’ve switched my position to be a pitcher and it’s actually not that bad. I think I can play until I’m 43.”

As it took Ha 10 years longer than many others to make his KBO debut, he was regularly asked whether he ever regretted leaving for the United States right after graduating high school. Although staying in the KBO may have allowed him to have a better career, Ha said he never regretted his decision.

“I think I’m here because I’ve experienced a lot of things in the United States,” Ha said. “If I stayed in Korea, I probably would have been preparing to head to the United States now. But since I’m the opposite of that, it’s fun.”

Although his season’s going smoothly and Ha is finally getting some recognition, Ha still has his concerns. Playing consistently through the season is one of the most important things to remember, and to do so, Ha said he’s keeping an eye on his pacing.

“When I started thinking about playing well and that it’ll work out this time, I started getting stiff and got injured,” Ha said. “Since I’m impatient, I tend to stretch myself a lot. After spending 10 years like that, I learned to control myself. I’m controlling myself to avoid pushing myself too hard.”