Millennials want a house and a car, but not marriage

Millennials want a house and a car, but not marriage 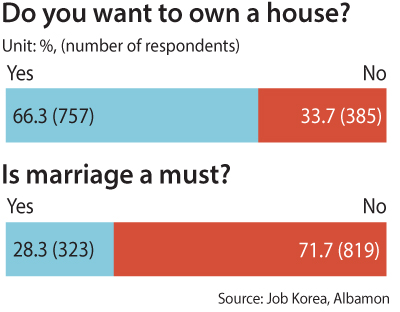 The majority of millennials believe they need to purchase their own house and vehicle, but are not so hot on marriage, according to a survey conducted by job search website Job Korea and Albamon, its website for part-time jobs.

While 66.3 percent of those surveyed believed in their or their spouse’s need to own a house, 65.1 percent were similarly inclined toward car ownership.

The main reason for desiring homeownership was being able to live without worrying about the rise in housing prices. Those not interested in owning a home said they did not want to take out large loans at high interest rates.

Of those surveyed, 71.1 percent said marriage was not necessary. Of those unmarried, 38.3 percent said they will not get married.

In regard to employment, 86.3 percent of the respondents said they believe in the need for a job. The most popular reason was to earn money, which was followed by self-development and self-actualization. A minority of those who dismissed the idea of having a job thought that way because they don’t feel the need to work for eight hours a day unless they enjoy the work. Others thought they should earn money only when it’s needed.