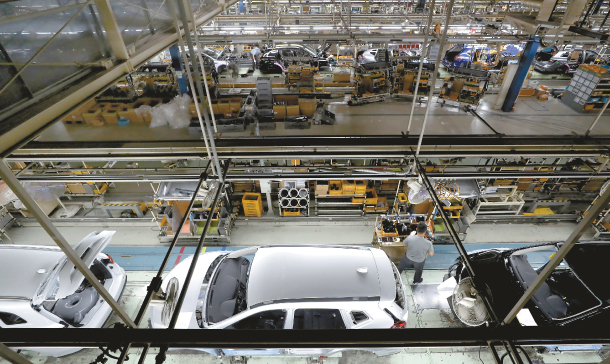 Workers showed up for their jobs at Renault Samsung Motors on Friday, the first day of a full strike. [YONHAP]

Two-thirds of the workers at Renault Samsung Motors showed up for their jobs Friday despite the union calling for a full strike.

The decision to walk off, the first full strike ever for the company, was made on Thursday. No date was set for ending the action.

Usually, 1,000 employees work during the day, manufacturing roughly 400 vehicles. Some 900 workers are on the night shift.

A partial strike was started at 12:30 a.m. in the morning on Thursday, but a worker on the line yelled, in defiance to the strike order, “Gomahaipsida,” which in the Busan dialect means “let’s stop.” The automotive plant is based in Busan.

A worker said that he was willing to lose some wages, but added that he had to think of his hangnim - Busan dialect for older brothers - at the parts suppliers. So he decide to work “wholeheartedly” and not strike.

On Wednesday, union representatives called for a partial strike, ordering the plant workers not to work. Even on Thursday, which was national holiday, 67 of 69 employees initially scheduled to work on the engine line during the holiday showed up to work.

“Initially all [engine] production was to stop on Thursday,” said a worker. “But I decided to come to work for the love of the company after hearing that there weren’t enough engines in meeting the quota.”

It’s unusual in Korea for an automotive plant to continue to operate despite orders from union representatives to stop work. Under the conveyor belt system, the entire process comes to a halt when one of the processes is stopped.

The fact that production plant operated as usual indicates that there’s more than a small number of people defying their union leaders. Unlike workers at Hyundai Motor or Kia Motors, who get paid by the hour, the production line workers at Renault Samsung Motors receive monthly wages.

Since their income is fixed, if they go on strike their wages are unaffected. Yet the workers still went to work.

Last year, the workers elected hard-line union representatives, as they believed that their pay was lower than that of their competitors.

But a company audit found that, including the welfare payments and social guarantee spending, each worker on average received 87.2 million won ($73,000) a year. With the tentative agreement signed on May 16, the company will be providing 17.7 million won in bonuses in exchange for a wage freeze.

One of the reasons for the lukewarm response from the workers is believed to be resentment over the aggressive tactics employed by union leaders. Until Friday, workers at Renault Samsung Motors had never gone on strike and were considered model workers.

Since negotiations started in June last year, the Busan plant has been hit with 65 partial strikes totaling 266 hours. As a result, the company is believed to have suffered 280 billion won in losses.

The strike was called not because of the substance of the agreement but over the use of the phrase “maintaining peace” in the joint statement.

Most of the company’s production-line employees are in favor of the tentative agreement.

While the union representative is demanding the company pay workers participating in the strike, the company has refused.