Styler is a surprise hit in the Japanese market

Styler is a surprise hit in the Japanese market 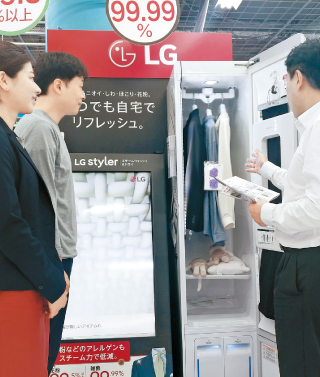 The LG Styler on sale in Japan. [LG ELECTRONICS]

The LG Electronics Styler is selling well in Japan, driven to a large extent by growing concern about pollen.

The Styler is a clothing management appliance that uses steam to reduce odors and wrinkles.

Sales of the product in Japan between January and May grew 50 percent on year, LG said Friday. The company added that the growth is a significant achievement considering the market is notoriously difficult for foreign electronics makers.

This year’s performance follows solid growth last year, with sales doubling from 2017, when the company first started exporting the product to Japan. Currently it is sold in more than 900 stores in the country.

The Styler’s success in Korea was supported by the rise of fine dust.

Inside the machine, clothes are hit by steam to make small particles heavier. Then the rack vibrates at a certain speed so the particles drop down. Wrinkling is reduced at the same time.

Last year, the Styler was certified as “asthma & allergy friendly” by the Asthma and Allergy Foundation of America.

The Styler’s popularity in Japan was boosted by public concern about pollen, the company explains. Hay fever and allergies are big problems in Japan, as the cedar and cypress trees planted after World War II have recently hit the age when pollen production peaks.

Japan’s high humidity and rainy season are other reasons for the Styler’s high demand. The appliance comes with a low-temperature drying function.

First introduced in Korea in 2011, the Styler pioneered a new product sector, a standing dry cleaner at home, in a market where only washing machines and clothes dryers existed. The product is now exported to 10 countries, including the United States, China and Germany.