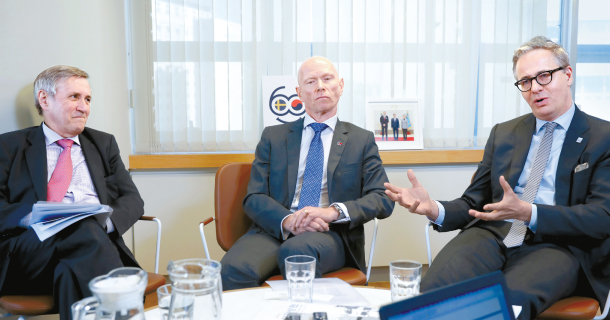 Transparency and trust in the government are the keys to becoming a successful welfare state, according to Jakob Hallgren, the Swedish ambassador to Korea.

He added that if people trust their government, it helps people accept high tax rates, as they believe it will be used effectively.

President Moon Jae-in will go on an eight-day tour of Finland, Norway and Sweden starting Sunday as part of an effort to promote the Korean government’s policies related to innovative growth, peace and inclusivity.

During Moon’s three-day visit to Finland, the first leg of his upcoming tour, Moon is scheduled to hold summit talks with Finnish President Sauli Niinisto on ways to strengthen bilateral ties.

Moon will then travel to Norway from June 11 to 13, where he plans to meet with Norwegian Prime Minister Erna Solberg. Moon will talk about the Korean peace process and the relationship between Korea and Norway, whose diplomatic ties mark their 60th anniversary this year.

On his trip to Sweden from June 13 to 15, Moon will attend a summit with Swedish Prime Minister Stefan Lofven with a focus on sharing the Korean administration’s vision for an inclusive state. Sweden is a role model in terms of cooperative labor-management relations. This year also marks the 60th anniversary of the two countries forging diplomatic relations.
Sweden offered medical support by building the first hospitals during the 1950-53 Korean War. Now, Sweden is serving as a mediator between the two Koreas. Economically, future cooperation between the two countries in telecommunications and software is on track.

Norway and Finland also have their eye on South Korea’s highly educated labor force. Norway has been working with Korea to solve problems in the Arctic, and Korea has operated the Arctic Dasan Station in Norway since 2002. Finland is inviting the information technology (IT) labor force in Korea through their Talent Boost project, where Korean workers work in the “land of a thousand lakes” to experience Finnish culture and share their knowledge on the subject.

Q. I would like to start with welfare. There is a controversy regarding universal welfare in Korea. Can you share your country’s experience on the matter?

A. Jakob Hallgren: It is important to remember that the Nordic states have not been betrayed by the government, [referring to former President Park Geun-hye being removed from power in 2017 for abuse of power and corruption] so trust is the key thing here. Progressively, people had no problem with paying a little more tax for things they believe is fairly cost effective. The government also takes responsibility so the tax is used to even out the difference between the rich and poor. The reason why that has been accepted is transparency. There is transparency for the use of taxes of public funds in Sweden and in Nordic countries. So as citizens, we can ask a politician or a civil servant on how the government money has been used, and they have a legal obligation to share that. And that increases that trust.

Frode Solberg: You have to find your own path because there is no correct approach. It’s based on cultural and societal development. People have seen betrayal in Korea. But, it is important that people see results. Many people think the taxation level is higher than it should be. Welfare is an insurance net, which is widely accepted as necessary for society.
Eero Suominen: This is based on a very Nordic value of equality, where we want to create for everybody an equal possibility to develop their competence and qualities in society. We try to urge people to use their capabilities in the best possible way, and we want to create such an environment where people are not dependent on wealth, money and status. But each person is free to make their own decisions regarding their career and education. And when things happen, there is always some kind of safety net that the government offers for citizens.

In Korea, welfare is closely related to political factors, left or right. How do you see it in this perspective?

Nordic countries have excellent transparency in their countries, societies and communities.

Suominen: We need transparency in order to be efficient and steer the different services that we are providing in a proper way. Finland’s tax and income information is pretty open. Honesty goes hand in hand with transparency.

Hallgren: Well, I think this is closely related to corruption because any Swede can ask the prime minister: “Where have you traveled? I would like to see your travel claims.” This is a very effective vaccination against the temptation to abuse power. These are bold rules and laws in our countries that there should be this kind of cultural openness. Transparency and this sense that everyone has an equal value and corruption are closely linked, I would say.

The North Korean nuclear issue is still a hot subject. Sweden has played a special role between the United States and North Korea. How do you see the nuclear negotiation and what is your assessment on South Korea’s policy toward North Korea?

Hallgren: Sweden has a particular role on the Korean Peninsula. There is a set of historical circumstances, which gives us a particular role, which has to do with the early arrival of the field hospital during the 1950-53 Korean War, the Neutral Nations Supervisory Commission and the first western country to open an embassy in Pyongyang. We do not represent a threat. We are not a geopolitical strategic actor. And then, we are brokers as we see the marriage at all sides. We are fully behind the United Nations Security Council Resolution and its implementation. However, dialogue is invariably important. Sometimes there is the tendency to forget that. We have a duty to promote peaceful outcomes.

As brokers, how do you see the deal of North Korean nuclear issues between the United States and North Korea?

Hallgren: Steven Biegun, the U.S. special representative on North Korea, Choe Son-hui, the North Korean vice foreign minister, and Lee Do-hoon, the South Korean Foreign Ministry’s special representative for Korean Peninsula peace and security affairs, met in Stockholm in January. This is an example of trying to offer a dialogue space. But the problem now is that working-level meetings have not happened, and that needs to happen. I can only say on Sweden’s behalf that I think we have a duty to try to promote peaceful solutions. Exactly how that is done is of course up to the parties. There were a few problems a few weeks back, but we have experienced now a long period with a more positive climate, and a climate for dialogue. We said before that our countries are characterized by trust and that is a key element to moving forward.

Suominen: I was in Korea in 2017 when the situation was quite critical. There is a considerable change of atmosphere compared to that. Finland is willing to help and we want to do it in a sort of a practical and technical way. It is our duty as a responsible member of the international committee. We don’t want to become the judges; we want to be the ones that help achieve reasonable solutions to the problem.

What kinds of results do you expect through economic cooperation between our countries?

Solberg: One specific area that we are cooperating on right now is electric vehicles. Most cars in Norway come from Kia and Hyundai, a very popular success story as you have to wait a year in advance to get a Hyundai Kona and a Kia Niro. We also have long-standing cooperation in the maritime sector. This is moving into renewable areas as corporations in the maritime sector are using Korea’s experience in building ships and oil rigs. Korea is also going into the renewable energy area. An offshore wind park is one area that is exciting and an important area where we will be working together in the future. Korea is also a very active participant in the Arctic area and the northern areas in general. Korea’s Arctic Dasan Station is in Norway.

Hallgren: Sweden actually has an industrial and economic structure that is similar to Korea. It has a very strong heavy, engineering, telecom and biopharmaceutical industry. It also has newer industries like music, design, gaming and software. Korea is trendy and is in the hype in our countries. Korea is interested in Sweden and Nordic solutions to problems, but the curiosity and hype about Korea in our societies is noticeable.

Suominen: The Talent Boost was started in order to get Korea’s highly-educated IT labor force into Finland. Finland has a lack of coders in the IT and software industry. What we can do for Koreans is provide them with a good life with work balance. This is good for the whole family because it gives spouses a chance to start their careers again. Everything is done to the same standards, the same salary standards and conditions with the Finnish, and the Talent Boost helps Finnish firms to recruit directly, not via other ways.