Moon-Kim summit in the works

Moon-Kim summit in the works 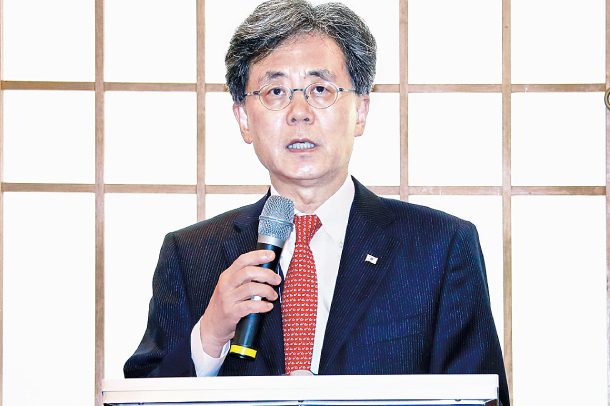 The Blue House said Friday it believes an inter-Korean summit could be held before President Moon Jae-in’s summit with U.S. President Donald Trump at the end of this month.

“We are continuing our efforts to contact North Korea,” a senior presidential aide said Friday. “President Trump is also repeatedly stressing the importance of dialogue. I think we are cautiously optimistic that there will be a good outcome.

“In diplomacy, we cannot reveal everything,” he said. “Just because it is hard to make the information public and just because [the two Koreas] are not meeting, it doesn’t mean that we are not doing anything. In fact, we are moving very busily.”

Trump will visit Korea as a part of a trip to Asia to attend a Group of 20 Summit in Osaka, Japan, from June 28 to 29. While no schedule has been announced by Seoul or Washington about a Moon-Trump summit, speculation is high that the U.S. president will make a brief visit to Korea on his way home from the G-20 summit.

Moon will visit Finland, Norway and Sweden from Sunday through June 16. If an inter-Korean summit takes place, it will have to be between June 16 and June 28 because Moon will also visit Japan for the G-20 summit.

During his trip to northern Europe, Moon will deliver a speech at the Oslo Forum on Wednesday to present his updated vision for peace on the Korean Peninsula, Kim Hyun-chong, second deputy national security adviser to the president, said. Kim said he will use the occasion to issue a message to North Korea, as he did in Berlin in 2017. It is the second time in a week that a top government official hinted at possible progress in arranging a fourth inter-Korean summit in the coming weeks. Unification Minister Kim Yeon-chul said Tuesday, “We have experience in arranging an inter-Korean summit quickly when there is a need, and various conditions exist now to again make that possible.

“The second summit in May last year in Panmunjom was urgently arranged after an initial plan for the North-U.S. summit was canceled,” Kim said, indicating that a similar meeting between Moon and Kim is possible to resurrect the North-U.S. dialogue.

The North has not publicly responded to Moon’s offer for a fourth summit. It, instead, urged Moon to stop acting as an “officious mediator.”

Asked if the time is on the U.S. side in overall nuclear negotiations or the North Korean side, the Blue House official said Friday that the answer is obvious. “Taking into consideration the 2020 U.S. presidential election, Trump would have calculated how much North Korea issues will have an impact,” he said. “The answer to who has the luxury of time will be natural if you look at the political calendar and election schedules.”

The official said Moon will meet with many international leaders on the sidelines of the G-20 summit. He said the Blue House is considering the possibilities of bilateral summits with Japan and China.

Meanwhile, a government official said President Xi Jinping of China will not visit Korea before the G-20 summit, dismissing earlier media reports. The JoongAng Ilbo reported Thursday that Beijing was planning for Xi to visit, which would be his first visit since Moon took office. The last time Xi was in Korea was in July 2014 during the Park Geun-hye administration. “Xi is not coming to South Korea” before or after the G-20 summit, according to the official, who spoke on condition of anonymity.