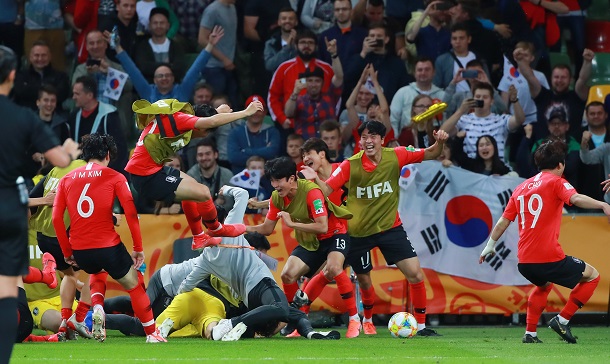 Korea's U-20 football team celebrates after winning their quarterfinal match against Senegal at the FIFA U-20 World CUp at Bielsko-Biala Stadium in Poland on Saturday. [YONHAP]

For the first time in 36 years, Korea’s U-20 football team advanced to the semifinals at the FIFA U-20 World Cup by defeating Senegal in a quarterfinal penalty shootout.

It was Senegal that first took the lead with Cavin Diagne scoring in the first half.

Korea finally broke their silence in the 62nd minute with a penalty scored by Lee Kang-in.

Shortly after, in the 76th minute, Ibrahima Niane allowed Senegal to bring back their lead, after the referee ruled Lee Jae-ik handled the ball in the box through the Video Referee Assistant. Although Korea’s goalkeeper blocked the first shot, he was given a yellow card for coming off the line too soon. Niane was given a second attempt and successfully scored to take the lead.

Right when it seemed as if Korea was about to crash out of the World Cup, Lee Ji-sol kept Korea’s hopes alive in the eighth minute of stoppage time, assisted by Lee Kang-in.

As the game headed into extra time, Korea was the one to take first blood this time, with Cho Young-wook scoring in the 96th minute. Amadou Ciss then scored an equalizer at the very last minute, and the match was forced into a penalty shootout.

Once again it was Senegal that took the lead. As Korea missed their first two shots and Senegal only missed one, they had a one shot lead. But it all came down to the last kicker.

As Oh Se-hun successfully scored his penalty shot and Diagne missed his, Korea was finally declared the winner of the 2019 FIFA U-20 World Cup quarterfinals, with the final penalty shootout score of 3-2.

This is the first time since 1983 that the team has advanced to the semifinals and could set the stage for Korea to reach the finals for the first time ever.

Korea will play Ecuador in the semifinals at Lublin Stadium on Tuesday at 8:30 p.m., or 3:30 a.m. on Wednesday, Korea time.