Striker Hwang Ui-jo came off the bench to score the winner as Korea defeated Australia 1-0 in their men’s football friendly match on Friday. 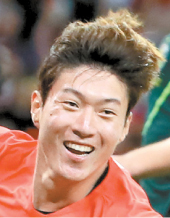 Hwang broke the scoreless deadlock in the 76th minute at Busan Asiad Main Stadium in Busan, jolting life into the sellout crowd of 53,000 that had been frustrated during what had up to that point been a tedious contest.

It was Hwang’s seventh international goal, six of which have come under head coach Paulo Bento in 15 matches.

“Since I had a lot more left in my tank as a substitute, I wanted to play hard and help my teammates,” Hwang said. “As a forward, I always enjoy scoring goals, and it’s even better when my goals help us win. This was a tough match, and I am glad we got the win without giving up any goals.”

Hwang also scored against Australia in their previous meeting last November. “Coming in as a sub, I wanted to change the momentum of the match. And it worked out great,” he said.

Bento threw a 3-5-2 formation at Australia. It was the first time in nearly six months that the coach went to this formation, with three backs - Kim Young-gwon, Kim Min-jae and Kwon Kyung-won - asked to handle most of the defensive duties while wing-backs Kim Jin-su and Kim Moon-hwan were give free rein to roam in the offensive zone.

Son Heung-min and Hwang Hee-chan started as forwards, and midfielders Hwang In-beom and Lee Jae-sung were the secondary attacking options. And with the two wing backs joining the offense, Korea essentially had six players to put pressure on the opposing defense.

But Korea didn’t even have a shot attempt in the scoreless first half. The team lacked delicate touch in the attacking third, and its transition game was virtually nonexistent.

Australia applied pressure on Korea’s back-three defensive line early on and created turnovers deep in the attacking zone. In the 10th minute, Brandon O’Neill picked Ju Se-jong’s pocket and set up Mitchell Duke for a shot that went wide left of the net.

Four minutes later, after another Korean turnover, Craig Goodwin floated one across the field for Awer Mabil, whose volley from the right side of the box was grabbed by goalkeeper Kim Seung-gyu. Australia’s best chance came in the 18th minute, when Duke’s header off an O’Neill corner kick went off the right post.

Korea pushed back a little in the final moments and nearly got an own goal in the 42nd minute from Australian defender Matthew Jurman, whose clearing attempt of a Kim Min-jae cross rolled just right of the gaping net.

Korea showed some signs of life early in the second half, though Lee Jae-sung held on to the ball a moment too long in his fast break opportunity in the 52nd minute.

Near the hour mark, captain Son Heung-min danced through a crowd of defenders, only to get triple teamed deep in the box and forced to pass it out of the area.

Hwang entered the match in the 67th minute for starting forward Hwang Hee-chan, and the Gamba Osaka forward made his presence felt in the 76th.

Australia used up all six substitutions in the second half but failed to match Hwang’s goal.

Korea’s next match is against Iran at Seoul World Cup Stadium in the nation’s capital at 8 p.m. tomorrow.