Experts work fast to save hanok from termites: Pests found farther north than ever due to climate change

Experts work fast to save hanok from termites: Pests found farther north than ever due to climate change 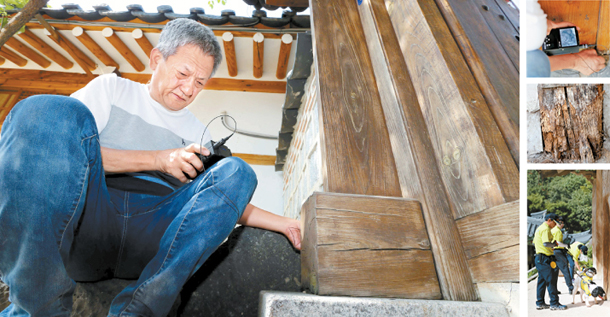 Above: Professor Park Hyean-cheal of Pusan National University checks whether wooden pillars have been attacked by termites.

The traditional Korean houses, known as hanok, that are concentrated in central Seoul’s Bukchon Hanok Village, are in need of major help after swarms of termites have caused significant damage to the historical structures. The community says that action needs to be taken immediately so that the homes can stand for the next generation.

Thousands of termites have been spotted around the country each spring for the past four to five years, with Korea seeing more tropical weather in recent years due to global warming. 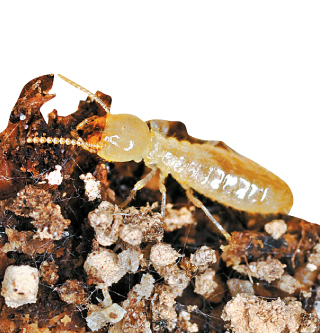 Termites move in large groups underground and seek out damp wood as a source of nutrition. [JOONGANG PHOTO]

Many of these termites have been spotted by residents in Bukchon Hanok Village, where many of the historic homes are built almost entirely out of wood. According to the Bukchon’s Hanok Support Center, from mid-April to May, there were seven reports from residents claiming that they have found termites.

Professor Park Hyean-cheal of Pusan National Univesity was examining the wooden pillars at the Hanok Support Center in Gye-dong, central Seoul, last month by knocking on them.

He said that the ants must have gnawed through the wood and the inside was probably cleared out. He entered a small camera lens inside the pillar. The camera quickly revealed what looked like a bumpy tunnel. The professor said this was what is called a “mud tube,” a route that termites use to get around.

Based on what he saw, Park said that the ants must have been here until very recently. Park, who studied at Curtin University in Australia, is the only person in Korea who holds a doctoral degree in ecology specializing in termites.

He also examined the outside of the building. He checked the pillars holding the main door of the center, as well as the door to the village’s library. They had both been eaten up by termites. 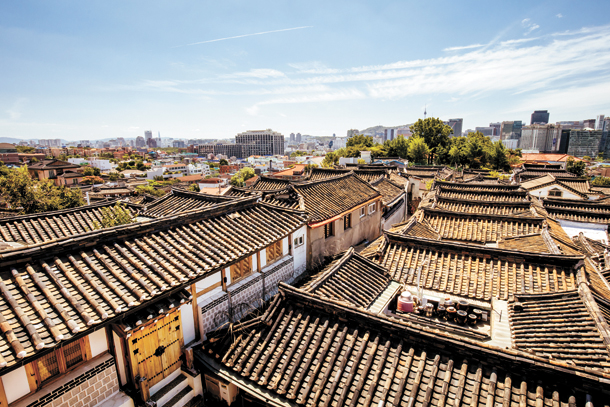 The bottoms of the pillars were heavily damaged and the exterior of each pillar, even with the naked eye, seemed empty inside and were covered in sponge-like holes. The professor once again put the camera inside the pillar.

The small insect wandered around for a bit before disappearing. Another one was spotted in the door of the hanok center.

“It looks like these two are in charge of surveillance. Termites send some ahead of the entire group before they move to [a new location] to look around.”

Termites usually move in groups and live in hot and damp environments, feeding themselves on dead wood. Living underground as they move from one place to another, they are rarely seen by people unless they fly outside to mate.

In Korea, this particular type of termites were mostly seen in the southern part of the country where it is typically warmer, but due to global warming, the ants have started to venture up north.

“Korea’s termites don’t have the capacity to hold moisture inside their bodies, so they only go to damp areas,” said Park, explaining why hanok are ideal feeding spots for termites.

At the moment, there is no good way to eradicate these pests. Existing pesticides do not work very well because the termites that people can see represent only about five percent of the entire group at best. Still, getting rid of small groups at a time could be the best option for lowering the total number right now.

While the best way to spray the pesticide is to cover the entire structure from top to bottom, it is unfortunately too poisonous to do so at homes where people actually live. Luckily, most protected cultural heritages sites that can be blocked off from the public can be sprayed with pesticides.

Termites in Korea seem to act differently than those in other countries. Overseas, it is not uncommon for buildings that have been attacked by termites to easily have the problem eliminated.

Groups of termites in other countries tend to stick to a single area and only have one queen ant, and once that queen ant is eliminated through extermination, the termite problem tends to dissipate.

On the other hand, termite groups in Korea tend to have up to 25 queen ants in a single group and are more nomadic and adaptable than their overseas counterparts, making it more difficult to eliminate the problem.

While it is difficult to chase away termites that have already started to invade a building, there are ways to stop them.

The most important thing to do is minimize as much moisture as possible, considering that termites need a damp environment to survive. Park also thinks that having a fireplace inside of the house may be helpful because setting up a fire helps remove additional moisture and the smoke can work as an insect repellent.

One of the best ways to prevent termites is to remodel the entire house. If residents take out everything, including the wooden floors, and spray pesticides on the soil below, termites won’t be found for many years, according to Kim Won-cheon, president of Hanok Sallim, a company that specializes in remodeling hanok.

One hanok that he was tasked to remodel was seriously damaged by termites. The pillars in the bathroom were heavily damaged and he said if there weren’t walls supporting the pillars, they would have fallen down many years prior.

Kim consulted with Park, took the floors out of the house and sprayed chemicals on the soil underneath. Four years later, the building has still not seen any termites or any additional damage to the wood.

The only downside to this process is that it costs a lot to take out the floors and put them back in.

There are about 10,000 hanok in Seoul. While the majority of termite spottings have been in Bukchon Hanok Village, there have also been reports coming from central Seoul’s Seochon and Namsan Hanok Village as well.

Seoul’s Hanok Support Center holds a seminar about termites at least once a year. The city government doesn’t provide any especially effective ways to prevent termite attacks besides suggesting that homeowners keep their homes as dry as possible. Many experts say that the government should work harder to find an economical and effective solution.

There is also concern that termites may attack other wooden cultural heritage sites across the country, especially since many of them are located close to mountains.

At the moment, the Cultural Heritage Administration is working to monitor the condition of many important structures and apply pesticides when necessary.

The government is also training dogs to find termites. Springer spaniels can be used to sniff out traces of termites and help identify where problems may arise. The security company S1, with help from Everland, trains the dogs as part of its community service program.

The Cultural Heritage Administration said that since termites emit a chemical that remain in places they’ve resided in, there is a high chance of finding them with the help of dogs. Currently there are three dogs working and two in training.