Private pension reforms in works as returns lag: Sector seen as in need of structural changes if rates remain too low

Private pension reforms in works as returns lag: Sector seen as in need of structural changes if rates remain too low 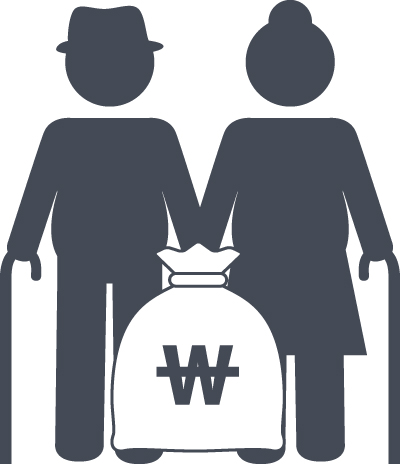 Heo Soo-jin, a 38-year-old woman working at a retail company in Busan, had been in the dark about her company pension, which had been building for a full decade, until she actually quit her job earlier this year.

“Details of the enrolment were stated on employment contract, but I didn’t really pay attention to it,” she said. “But it would have been better to know from the beginning so I could sift through available options,” Heo said.

This anecdote is common among company employees because they are not incentivized to familiarize themselves with the programs and engage because of the low returns of occupational pension schemes and regulations limiting active involvement.

The average returns on Korea’s occupational pension funds was a meager 1.01 percent last year, according to the Financial Supervisory Service, an alarming result for a country with one of the fastest aging populations. Taking into account inflation, the real rate of return can be negative.

At the same time, employer-backed pension assets keep increasing. In 2011, the total amount in private pensions stood at 49.9 trillion won ($42.3 billion), but it is now at 190 trillion won, according to the Korea Institute of Finance.

The figure is expected to exceed the 200 trillion won mark in 2020, with the government’s push to mandate more companies put aside a portion of a worker’s salary as a pension. Presently, any corporate unit with more than 10 workers is required to register with a pension plan - either defined benefit or defined contribution. By 2020, all companies will be required to do so. 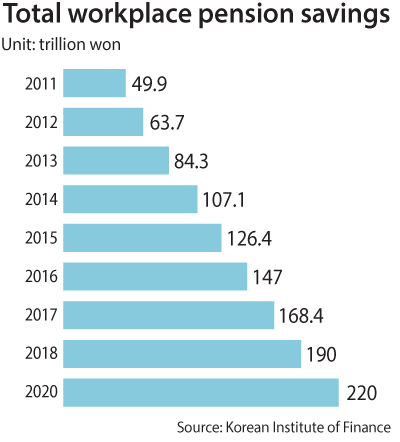 Despite the widening scope, the persistently low yield is considered a major problem.

“The companies with defined benefit plans could fare worse under this environment,” the researcher said.

Policymakers are scrambling to reform the schemes with an aim of boosting returns.

First introduced in 2005, Korea’s occupational pension system limits changes that can be made to portfolios.

Partly due to the limitation, 64.3 percent of pensioners are enrolled in defined-benefit plans that promise lump-sums on retirement based on earnings history, according to the Financial Supervisory Service.

This is why Kwon Yong-won, head of an association representing investment companies, advocate the introduction of a default option.

“The National Assembly is discussing this at this moment, but its priority seems to have been pushed back by other issues,” Kwon said in a recent interview with the JoongAng Ilbo.

“I expect it to be enacted shortly,” said Kwon, chairman of the Korea Financial Investment Association.

“In the past, utilizing fixed deposits was a safe and excellent way to invest, as bank interest rates were high enough then,” Kwon said. “But now, relying on the low interest rates of today is not sufficient to provide for old age.”

But some experts said that the measure could increase risk.

“The scheme has a drawback where the fiduciary is not immune from liabilities when default products underperform,” said Song Hong-sun, a researcher at Korea Capital Market Institute, in a report.

Another push by the committee is to introduce institutional management of retirement pensions in the private sector where a board at a company is in charge of managing the pensions.

The Labor Ministry reviewed the suggestion but withdrew the proposal aimed at introducing superannuation funds last year, saying Korea has an insufficient infrastructure to manage the program.

With a dynamic discussion taking place, financial institutions are gearing up to tap on the 200 trillion won market by reorienting their business focus and personnel.

KB Financial Group announced last month a plan to revamp the structure of its retirement pension business to utilize resources from across its affiliates.

Under the plan, it established two new units under its wealth management division tasked with working across KB affiliates with the aim of advancing of its pension lineup.

The banking unit upgraded the status of its pension business division and reorganized the structure so it has separate production development and marketing.

“The pension products are lucrative because they can bring in long-term clients with significant financial commitment,” said a spokesperson at KB Kookmin Bank.

“This is why KB and other competitors try to boost competitiveness in the sector,” he said.