[5G Future] The entertaining road ahead for 5G

[5G Future] The entertaining road ahead for 5G

The auto industry’s transformation toward a self-driving, connected future could accelerate because of one key technology: 5G.

Though self-driving and connected car technology existed even without the 5G wireless network - which went live just two months ago in Korea - the super-speed network opens up new possibilities for carmakers as well as mobile carriers providing infotainment systems for cars.

5G’s major role in the auto industry is to aid self-driving by connecting cars with traffic infrastructure, including traffic signals and roads, and other cars, so if an accident is imminent the vehicle can immediately alter the route or at least get prepared.

If self-driving really takes off, drivers won’t be driving anymore, sparing up time to do something else. That’s where 5G can step in and offer live-streaming of ultra-high definition content, including virtual reality and augmented reality videos.

“5G isn’t a critical technology for self-driving cars as you can still use existing networks,” acknowledged Sunwoo Myoung-ho, a professor at Hanyang University who leads the Automotive Control and Electronics Laboratory (ACE Lab). “But it will introduce an era of information exchange that we have yet to imagine.”

5G resolves the issue of latency.

A self-driving car traveling at 100 kilometers per hour (62 miles per hour) would move around 83 centimeters (32 inches) before a remote braking signal reaches the vehicle on the 4G network. The autonomous car would travel just 3 centimeters on 5G.

While the established network isn’t slow by any means, the difference could be key for safety in a self-driving car that needs to react instantaneously to the stream of constant traffic information that it processes.

In March, when LG U+ demonstrated a 5G-connected self-driving car jointly with Hanyang University’s ACE Lab, the car dubbed A1 made a 25-minute trip through Seoul’s busy traffic.

While its general driving skills was impressive, like turning on blinkers to change lanes and adjusting speeds in accordance with speed limits, the highlight of the demonstration was the car changing its route immediately after an accident was reported.

In the demonstration, the accident occurred at a location distant from the vehicle, so the vehicle had some time to adjust. But if it was really an emergency, in which an accident took place right in front and the car needed to brake, the connection to 5G could really make a difference.

“Braking is something that you should have within 10 milliseconds,” explained Rasmus Rettig, a professor at the University of Applied Sciences, Hamburg. “Relying on information in perhaps five seconds, you’re too late and you can’t rely on that system anymore.”

“[Adopting 5G] basically means that there is no delay in receiving information,” said Sunwoo.

While current self-driving cars are highly reliant on sensors in reading traffic lights and speed limits as well as adjusting distances with cars in front, Sunwoo said stable 5G connectivity could reduce the need for a “plethora of sensors,” as the car would be able to receive traffic information in real time from the broader traffic infrastructure network.

The potential of 5G is leading self-driving technology developers to partner with mobile carriers.

Thor Drive, staffed with researchers from Seoul National University who created one of the country’s first self-driving vehicles, signed an agreement with SK Telecom in January to co-develop 5G connectivity for cars.

KT has partnered with Seoul National University’s Institute of New Media and Communications to test the company’s self-driving technology and to speed its commercialization.

A remote control center can take over the driving if the operator is incapacitated, and connect the driver to medical staff by video communication through the 5G network.

Unmanned Solution, a local autonomous vehicle maker established in 2008, has partnered with KT to utilize the super-fast network for its self-driving shuttle WITH:US.

The automaker’s autonomous shuttle incorporates remote cockpit technology and is expected to be commercialized for uses in theme parks and at industrial complexes. 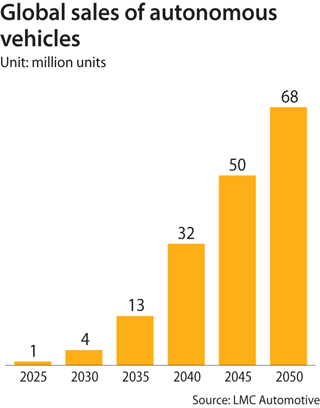 The carrier said it succeeded in broadcasting full high-definition content, which boasts about four times better resolution compared to existing systems, in real time on screens inside cars. The company also demonstrated each screen, deployed on the back of two front seats like in airplanes, broadcasting different advertisements. SK Telecom said that instead of offering same ads for all consumers, 5G connectivity could recognize each user and offer customized ads for them in the future.

The company explained that the next-generation infotainment system will be able to update maps, with traffic or restaurant information, in real time, while also being able to broadcast various views of a program on multiple screens, such as different camera perspectives of a football match.

The use of VR and AR could also become common inside cars with 5G connectivity.

In the March demonstration by LG U+, riders inside the car put on VR gear to experience VR travel content in the backseat. KT also demonstrated seamless VR availability inside their 5G-connected bus during a 30-minute ride around central Seoul in January.

Then, the mobile carrier used 5G mobile routers that convert 5G signals into super-fast Wi-Fi as 5G for mobile phones was not commercialized before April.

The roll out of the 5G network nationwide in the near future is expected to drive the auto industry’s development into infotainment and new mobility services such as connected vehicles.

Stamford, Connecticut-based Gartner forecasts that globally over 250 million vehicles, or one in five on the road, will be connected to the network by 2020 and that the in-vehicle infotainment market will grow to a $270 billion market.

In light of the potential of the new technology, the Korean government is pushing hard to develop 5G and self-driving infrastructure.

The industry organizes self-driving vehicles into five levels, in which the highest level indicates full automation, processing more information and having more autonomy in driving decisions. Most vehicles today are at level one and two, where the human driver is mainly in control of the vehicle at all times and is assisted by the system.

Telecommunications operators, universities and automakers have already set up shop at the testing grounds, installed with a 5G network and mock highways, tollgates and crosswalks.

Hyundai Mobis installed a 5G network at its self-driving test grounds in Seosan, South Chungcheong, earlier this year by working with KT.
“We are currently developing real-time updating navigation technology and vehicle-to-everything technology based on the 5G network,” explained a Hyundai Mobis spokesperson. “We plan to test the technology in the second half of the year.”

Other countries are also testing the network for new mobility services.

Japan’s Sony is currently working with NTT Docomo for real-time transmission of high-definition video to a digital signage system on the exterior of a concept vehicle.

From top: SK Telecom’s self-driving car, connected to a 5G network, drives by itself on the road in K-City in Hwaseong, Gyeonggi. Passengers enjoy immersive content in Unmanned Solution’s WITH:US shuttle, connected to KT’s 5G network. ACE Lab and LG U+ partner to demonstrate a self-driving car in an urban environment. A bird’s-eye view of K-City. [SK TELECOM, KT, LG U+, KOREA TRANSPORTATION SAFETY AUTHORITY]

As more control is left to the device communicating with the environment, there are immediate concerns surrounding the security of the data transmitted through the network.

“With the introduction of the 5G network, we expect more connected devices and in turn, increased threats,” explained an official at Korea Internet & Security Agency.

According to London-based IHS Markit, the automotive cybersecurity market is expected to reach $759 million in revenue in 2023.

Companies have already worked to address the concerns.

SK Telecom demonstrated earlier this year at CES 2019 its quantum security system that protects data transmitted from the autonomous vehicle through the 5G network.

KT introduced its “GIGAstealth” system, which uses blockchain technology to a prevent user’s IP address from being exposed. The company plans to apply the technology on communication modules developed by Netherlands-based security company Gemalto.

Other broader concerns exist as well, such as the general lack of understanding of self-driving cars.

The government has been aggressive in promoting the industry, on concerns that Korea might lag behind other countries.

Thor Drive was established in 2017 in the United States after Korean researchers left the country at a time there were no regulations related to the new technology, making it difficult to achieve actual development.

Since then, the National Assembly passed a bill laying the ground rules for self-driving cars and supporting its commercialization in April.

The new law defines the parameters of partial and completely autonomous driving and allows exemptions to safety regulations for certain test areas to commercialize the vehicles.

It also outlines measures to prepare for autonomous vehicle infrastructure.

Nevertheless, experts say it will take time for 5G to make big changes in the mobility market.

“It will take around five years for 5G to have a central role [in mobility],” explained Sunwoo, adding that the network and self-driving technology is still in its infancy.

The government has targeted the nationwide rollout of the 5G network by 2022.