Danube boat will not be raised until tomorrow at earliest

Danube boat will not be raised until tomorrow at earliest 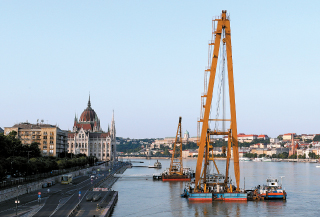 A crane that will be used to lift the Hableany, the tourist boat that sank in the Danube River while carrying 33 Korean passengers on May 29, is docked near the collision site on Sunday. The accident killed 18 Koreans and one Hungarian, with eight Koreans one Hungarian still missing as of press time Sunday. [NEWS1]

The Hableany, the boat that sank in the Danube River, killing 18 Koreans with eight still missing, is not expected to be lifted from the riverbed until tomorrow at the earliest.

“We hardly believe that we will be able to [lift the boat] on Pentecost on Monday,” Nandor Jasenszky, spokesperson of Counter Terrorism Centre of Hungary, told the press on Saturday, according to Index, a Hungarian media outlet.

Jasenszky said that all windows and openings on one side of the boat have been closed and that authorities were working on closing the openings on the other side to prevent any loss of remains.

When the boat will be salvaged from the river will be determined based on how quickly authorities can wrap wires around the vessel, according to the Korean government.

“The wires are thick and installing them can take time,” said Song Shun-keun, a Korean defense attache heading the joint rapid response team in Hungary, in a press conference in Budapest on Saturday.

The plan is to lift the Hableany off the riverbed by attaching it to a crane vessel with the wires.

Hungarian authorities brought a large crane vessel to the Danube last week. They had to wait a few days until Friday for the water level to subside for the vessel to fit under the Margaret Bridge to reach the Hableany.

The Hableany sank in the Danube on May 29 while carrying 33 Koreans and two Hungarian crew members. It sank within a few seconds of being hit by a larger vessel, the Viking Sigyn, near the Margaret Bridge.

Hungarian authorities pulled 14 Koreans out of the river that night, seven of whom were already dead. None of the 33 Korean tourists on the boat were said to be wearing life vests.

Since then, 11 more bodies have been recovered from the Danube, with one found as far away as 102 kilometers (63 miles) south of the point of collision. Eight others were still missing as of press time Sunday. The body of one Hungarian crew member was recovered on Thursday. One is still missing.

Investigations into the captain of the Viking Sigyn are ongoing.

Yuri C., the 64-year-old Ukrainian captain of the Viking Sigyn has been arrested and charged with manslaughter and violation of Hungarian navigation law, specifically in regard to how a larger vessel on the river is supposed to navigate alongside a smaller boat.

Arrested the day after the collision in the Danube, Yuri C. requested bail and was granted it by a local court in Hungary, but the Hungarian prosecution has requested the court reconsider its decision.

“We found traces [of evidence] of Yuri C. trying to destroy evidence after the collision,” Ferenc Levis Levente, deputy spokesperson of the Prosecution Service of Hungary, told the JoongAng Ilbo exclusively on Thursday.

“While we cannot specify the evidence that he tried to destroy, we have confirmed his attempt to do so through forensic inspection [of his cellphone].”

Two of Yuri C.’s lawyers, including Gabor Elo, who has told media outlets that the captain had a perfect record in his 44 years of sailing, resigned Saturday. Yuri C. reportedly hired another lawyer.

The prosecution asked the court for a detention warrant for Yuri C. on June 1. His warrant hearing is expected to take place in the coming week.

In the meantime, the Korean government has asked the Hungarian prosecution to charge Yuri C. additionally with hit-and-run and neglect of duty to rescue, the JoongAng Ilbo reported on Sunday.

“The Korean government is asking the Hungarian prosecution to charge the captain with hit-and-run and neglect of duty to rescue, in addition to the existing charges,” a government insider told the JoongAng Ilbo, adding that the request has been conveyed to the office of the prosecutor general in Hungary.

Foreign Minister Kang Kyung-wha also requested cooperation from her counterparts in Hungary and Serbia regarding the investigation and search efforts during her trip to the region over the weekend for the foreign ministers’ meeting of Korea and the four member countries of the Visegrad Group - the Czech Republic, Hungary, Poland and Slovakia.

Some 50 relatives of Korean victims had traveled to Budapest since the accident. The first cremation service for some victims was held on Thursday.

“We expect some relatives to start flying back with the remains, some two to three days from today,” Lee Sang-jin, Korea’s deputy foreign minister for consular affairs, told the press Thursday.