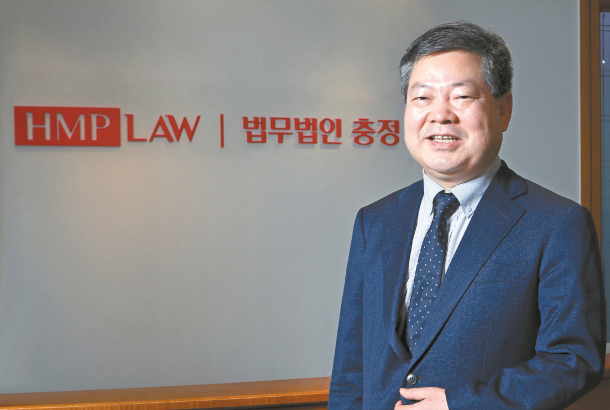 HMP Law doesn’t have a single office outside of Korea and has no plan to open one soon.

Park Kyun-je, the law firm’s managing partner, wasted no time in making that clear, as well as the point that it’s difficult for HMP Law to hire as many lawyers as the top five, six or even seven law firms in the country - for now or in the near future.

An early conclusion HMP Law has reached about going abroad, said Park, was that it doesn’t need to open a foreign branch to handle global work or attract clients from other countries. Through various other routes, HMP Law has managed to build a worldwide network of partners, he said. Now, more than 60 percent of its work is from international clientele, a high rate for a law firm that has no foreign offices.

In terms of inbound work, Park humbly admitted that HMP Law isn’t trying to become the best law firm in every single legal field in Korea. With a strategy like that, the firm could actually lose its competitive edge, he said.

“My goal is for HMP Law to be known as the law firm with the highest customer satisfaction rate,” said Park. “That means I want our clients to stick with us because we’re that good, so good that they don’t even think about finding another Korean law firm to work with, at least in the legal fields we’re best at. And we’re concentrating our resources in those areas to make sure we stay the best.”

The firm is particularly strong in pharmaceuticals, biotechnology, energy, information and communication technology, the environment, insurance and real estate redevelopment and reconstruction.

During a recent interview with the Korea JoongAng Daily at his office in Jung District, central Seoul, Park explained how globalization works at HMP Law and how the strategy has won the loyalty of its clients.

Q. Does HMP Law have any immediate plans to establish a foreign office? If not, why so?

A. In October 2016, when around 4,000 Korean companies were entering the Vietnamese market, we sent several of our lawyers, including then-managing partner Mok Kun-su, to Ho Chi Minh City in order to assess the possibility of establishing an office in the Southeast Asian country. However, after numerous meetings with leading Korean companies and banks that had already settled down in Vietnam, we realized that Vietnam was similar to China in that government officials there personally have great influence over many areas of business due to a lack of clear and specific regulation in Vietnam’s legal system. In such a legal environment, we felt that the only work we could possibly do is facilitating communication between Vietnamese lawyers and Korean companies, which we were already capable of doing from Korea. A similar conclusion was reached later in Indonesia. So currently, we don’t have any plans to open a foreign office soon.

What kind of international work are you handling from Korea?

Since HMP Law was founded in 1993, our firm has consistently provided superior cost-effective legal services to international clients in various business areas, including cross-border mergers and acquisitions, inbound investment and general legal advisory work in Korea. We also have a considerable amount of outbound work from domestic countries. From entering foreign markets to exiting them, we provide legal assistance to Korean companies throughout the entire process with the help of our international network of law firms.

HMP Law has a “one-stop” service in Asia. How does that system work?

The system revolves around the concept of providing all-round and effective legal services to clients with increasingly international legal needs. Taking advantage of our extensive network within the region, we are able to act as a bridge between domestic clients and well-known law firms in Asian countries.

An example that’s currently in the works is a case in which we’re helping a Kosdaq-listed IT company set up a global blockchain business in Hong Kong in coordination with a law firm there. In addition to connecting our clients to appropriate law firms in foreign countries, we routinely exchange information on newly implemented laws and regulations with our global partners in each of our respective countries. Such a strong network allows us to provide better, faster legal services to our clients, wherever in Asia they wish to take their businesses.

HMP Law’s globalization strategy is, and always has been, achieving global customer satisfaction based on exceptional services. This is why we aim to further strengthen the areas we have traditionally excelled in. To this end, we have steadily expanded and consolidated our international presence through various means, including signing a strategic partnership in 2014 with Bird & Bird, an international law firm based in London. We also send a number of our lawyers to international conferences each year.

HMP Law made headlines last December for recruiting Michael Hay - a dual British-French national who co-ran a law firm in Pyongyang helping foreign investors wanting to do business in the North - to handle work on inter-Korean relations. But inter-Korean ties haven’t made much, if any, progress since then. What’s he up to these days?

Michael currently holds briefings and seminars to both the private and public sectors in Korea and abroad. He has 22 years of experience dealing with North Korea, and for 12 of those years he lived and worked in Pyongyang. Drawing from such unique and extensive expertise, his presentations highlight to audiences the practicalities of dealing with the North, including negotiation tactics and specific dos and don’ts.

While it’s hazardous in the current climate to rush into business dealings with North Korea, we believe there is great potential for future business opportunities once the issue of international sanctions is resolved. With distinguished experts like Michael on board, HMP Law remains prepared for the future in assisting clients with every potential legal need.

The IBA actually reached out to us a couple of months ago to ask whether Michael could give a presentation during the IBA annual conference on doing business in North Korea, and he accepted the offer.

Many big-name law firms in Korea are trying to enter new legal markets. Is HMP Law making any such attempts?

In 2017, we formed a team named Tech & Comms to handle information and communication technology work, with partner Ahn Chan-sik as the team leader. We were one of the first Korean law firms to create a team specifically dedicated to legal work related to blockchain, cryptocurrency, the sharing economy, electric and other eco-friendly vehicles, drones and gaming. Our lawyers regularly contribute columns and editorials to established publications, while also participating in related conferences as members of panels.

HMP Law has built a solid reputation in Korea for providing top-tier legal service in the field of pharmaceuticals and health care. What’s the secret?

Our health care team is and always has been one of the best among all law firms in Korea. Since its founding in 1993, HMP Law has represented numerous domestic and multinational pharmaceutical and medical device companies, and many of these clients have stayed with us since the beginning. We believe such a strong and extensive relationship with our clients in this particular industry has enabled us to accumulate a deeper understanding of the ins and outs of the health care industry and its regulatory environment.

Do you have any plans for the upcoming IBA annual conference in Seoul in late September?