The wooden staircase leading up to the entrance of a full-size replica of Admiral Yi Sun-shin’s turtle ship in Yeosu, South Jeolla, collapsed on Saturday.

The seven Korean tourists on the stairs at the time fell about 10 feet, with one serious injury reported. 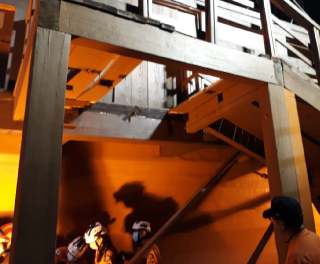 The wooden staircase to a replica turtle ship in Yeosu, South Jeolla, that collapsed on Saturday. [NEWS1]

The wooden stairway to the ship, built in 2014, collapsed around 8:44 p.m. on Saturday, according to authorities. A 59-year-old woman surnamed Kim was reported to be seriously injured, while four other tourists sustained minor injuries. Two others fell but were not injured, police said.

Authorities found that the wooden stairway had not been replaced once since the turtle ship was built in February 2014. The Yeosu city government, which manages the structure, said it found no cause for concern in safety inspections of the stairway, including one it conducted just four days before it collapsed.

“Since the structure was built in 2014, we have had to do some work on supporting parts of the stairway, to strengthen it, or work on some parts of the ship due to leaks during rain, but we did not find any alarming signs of anything more,” an official from the Yeosu city government told the JoongAng Ilbo. “But we are still investigating why the stairway collapsed. We will come up with the necessary measures to prevent another accident.”

Police suspect the wooden stairway may have been weakened after days of rain in Yeosu. As much as 45.1 millimeters (1.77 inches) of rain fell on Thursday and 11.1 millimeters on Friday, according to the Korea Meteorological Administration. Authorities said they will continue to investigate the city government for its maintenance work on the structure.

The remake of Admiral Yi Sun-shin’s turtle ship, which is 26.24 meters (86 feet) long, 10.63 meters wide and 6.56 meters high, sits on the coastline next to Yi Sun-shin Square in the southeastern part of the city.

The city government built the model, spending 1.3 billion won ($1.1 million) on the replica in honor of the admiral. Yeosu is home to the shipbuilding yard that built Yi’s turtle ship - a warship used by the Korean Navy mainly in battles with Japan during the Joseon Dynasty (1392-1910) - and is also the city where the first turtle ship is said to have set sail.

While the Yeosu city government had planned to have the structure float on the water, it was unable to reach an agreement with boat owners unwilling to give up docking space for the installation.

The inside of the wooden vessel is designed as a museum with information on how Yi directed and strategized his battles with Japan. It is visited by some 300,000 people every year, according to the Yeosu city government.

“The structure is visited by many throughout the year, especially during the annual local festival dedicated to Yi and his turtle ships,” said Kim Chan-soo, a 46-year-old resident of Yeosu. “But there have been issues with leaks during rain. The government must act quickly to renovate it.”