Seoul, London agree to an FTA for after Brexit

Seoul, London agree to an FTA for after Brexit 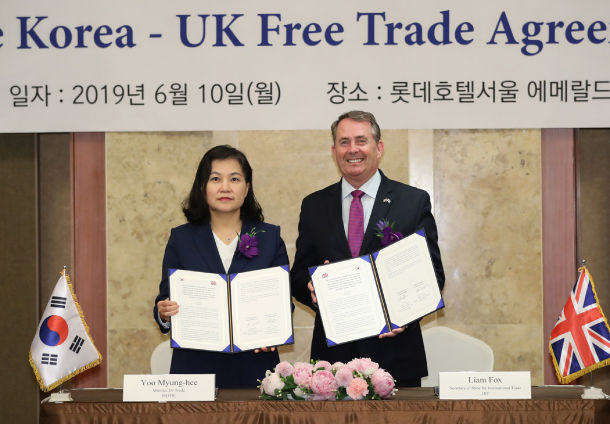 Korea’s Minister for Trade Yoo Myung-hee, left, and her British counterpart Liam Fox pose after signing a preliminary free trade agreement on Monday at Lotte Hotel Seoul in central Seoul to prepare for Britain’s withdrawal from the European Union. [YONHAP]

Korea became the first country in Asia to make a post-Brexit free trade agreement (FTA) with Britain to maintain existing trade commitments with the country even if it leaves the European Union (EU).

The Ministry of Trade said Monday that the two countries signed an FTA in principle, intended to stabilize bilateral trade relations and reduce uncertainties stemming from Britain’s planned withdrawal from the EU later this year.

The agreement, announced by Korea’s Trade Minister Yoo Myung-hee and Britain’s Secretary of State for International Trade Liam Fox at the Lotte Hotel Seoul in Jung District, central Seoul, is expected to be ratified before Oct. 31, when the EU member state is due to leave the union.

Korea and Britain have enjoyed free trade relations under the Korea-EU FTA that went provisionally into effect in 2011. Britain is Korea’s second-largest trade partner among EU-member countries after Germany.

“The in-principle FTA between Korea and Britain is meaningful in that it eliminates uncertainties amid a worsening export situation due to the U.S.-China trade conflict and China’s slowing economic situation,” said Yoo.

“[We] will prepare measures in response to various scenarios possible from Brexit so that our companies will be able to continue business in a stable and sustainable manner in Britain,” she added.

The announcement puts to rest concerns about a potential “no-deal Brexit,” or Britain leaving the political and economic bloc without an agreement. Existing trade relations between Korea and Britain could have been jeopardized under that scenario without an FTA.

Korean exports to Britain reached $6.36 billion last year compared to $4.97 billion in 2011, according to the Korea International Trade Association. British imports to Korea in 2018 amounted to $6.81 billion, 78 percent higher than in 2011.

“[The FTA] will allow British and Korean businesses to keep trading and investing on the same terms as we do today,” explained Fox.

Under the new agreement, Korea’s major exports to Britain such as cars and auto parts will continue to be exempt from tariffs. According to the Trade Ministry, without an FTA with Britain, Korean exports to the country would have been levied at an average tax rate of 4.73 percent.

The ministry added that conditions to implement agricultural safeguard measures in the new FTA have been changed from existing standards in the FTA between Korea and the EU in order to protect Korea’s agriculture industry.

Britain has so far signed trade agreements with 12 trading partners and regions in order to minimize the fallout from Brexit, including Chile and Israel, according to Britain’s Department for International Trade.

Korea and Britain had been negotiating a deal since December 2016, after the Brexit referendum in June.