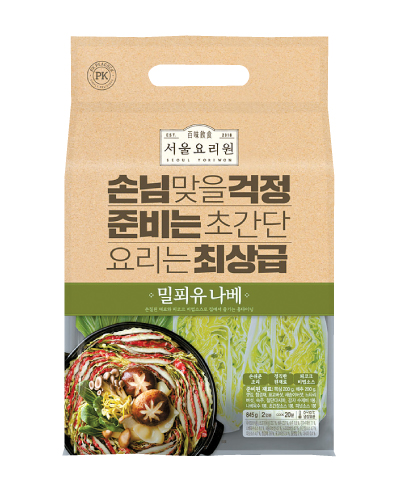 A meal kit from Emart. Meal kits are seen as a growth product with high potential. [EMART]

With the rising number of single-person households, meal kits are seen as an answer for struggling food companies.

According to the industry, meal kits are not HMRs as they only provide the ingredients for preparation. HMRs are fully or partially prepared and only require heating.

Meal kits have become increasingly popular among those who don’t have time to go grocery shopping or want to avoid buying large quantities of ingredients.

With HMR sales becoming increasingly competitive, the industry is looking toward meal kits for growth.

Peacock’s primary target for its meal kits is married couples in their 30s and 40s who have abundant foreign experience and grew up during the rapid development of Korea’s food industry, according to Emart.

Emart says its meal kits can be purchased immediately at its offline branches as well as via the group’s online platform. Some meal kit providers only accept orders online, which could take a couple of days to arrive, and are sold on a subscription basis.

Meal kit sales have increased with the changing family structure in Korea and the rise of single-person households.

“Emart entered the meal-kit market seeing its explosive growth following the structural population change and the rising number of single-person and two-person households,” said Emart in a statement.

The rise in demand for home-cooked meals since the adoption of the government’s 52-hour workweek policy has also contributed to meal kit’s popularity, according to Emart.

Industry insiders believe the meal kit market will grow twofold this year to 40 billion won from 20 billion won last year. The market is forecast to reach up to 70 billion won by 2024.

“Meal kits could become a very lucrative business in Korea, with the country’s advanced delivery infrastructure,” said Sunny Moon, senior research analyst of food and nutrition at Euromonitor International Korea. The fact that buyers can choose various options - from gluten-free to low-carb - will also help the market grow, according to Moon.

Unlike the HMR market, which has grown highly competitive, the meal kit market has a lot of potential since it is still developing, according to Cho Sang-hoon, a Samsung Securities analyst.