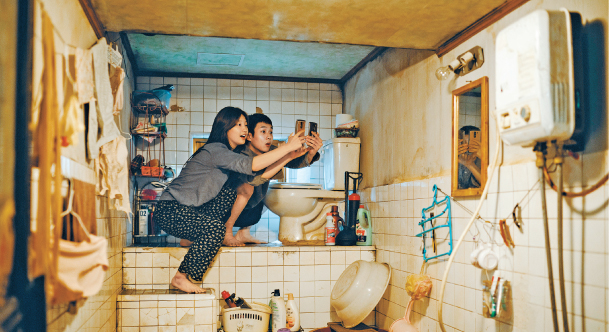 Director Bong Joon-ho’s “Parasite” remained No. 1 at the local box office over the weekend. Bong told the press last month that the bathroom in the poor family’s house was inspired by a real underground basement he had visited for research. [CJ ENTERTAINMENT]

Director Bong Joon-ho’s “Parasite” held on to its spot atop the box office for the second weekend in a row, with local moviegoers curious to see the Palme d’Or-winning film themselves.

An estimated 1.7 million admissions were sold at 1,578 screens, according to the Korean Film Council. The film tells the story of two completely different families on the opposite ends of the social pyramid who end up intertwined after the extremely poor family becomes a part of the rich family’s lives.

Second place was taken by Disney’s live-action remake of “Aladdin,” with over one million moviegoers checking out the film at a total of 1,372 screens. Local Disney fans hummed along with the familiar tunes as they watched the famous musical come to life, with an interesting twist regarding the development of Princess Jasmine’s character.

“X-men: Dark Phoenix” took the third spot in its debut weekend, with an estimated 370,000 tickets being sold at 868 screens. When the movie’s cast visited Korea to promote the film last month, they revealed that this film is the final installment in the current iteration of the X-men movie series. The film tells the story of Jean Grey’s changing personality, which ends up endangering the survival of the X-men and the rest of the world.

With her telepathic and telekinetic powers, Jean Grey is one of the most powerful mutants at Professor Xavier’s School for Gifted Youngsters. However, Grey remains unsure of the capacity of her powers until she fully absorbs a mysterious cosmic source on one of her rescue missions. When she regains consciousness on Earth, she discovers her powerful abilities further amplified, and another personality, called Dark Phoenix, who is set to destroy the world.

A re-release of the popular Studio Ghibli animated film “My Neighbor Totoro” finished in fourth place. About 63,000 audiences saw the film at 435 screens. 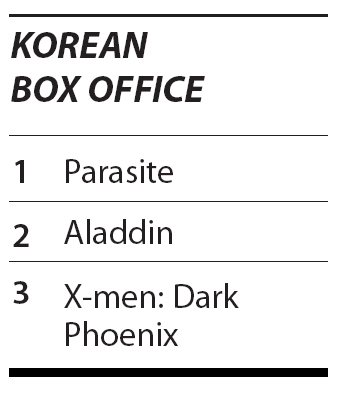 “Rocketman” managed to hold on to the edge of the box office charts, landing at fifth place in its debut weekend. The film sold 39,000 tickets at a total of 534 screens.

The movie tells the life story of legendary rock singer Elton John. The singer is played by actor Taron Egerton and the film is directed by Dexter Fletcher, who also directed the hit film “Bohemian Rhapsody,” another musical biopic about the band Queen.

Although John gained fame and success at an early age due to his natural musical abilities and colorful performances, he struggled with personal problems regarding his family, his homosexuality, drug addiction and depression.